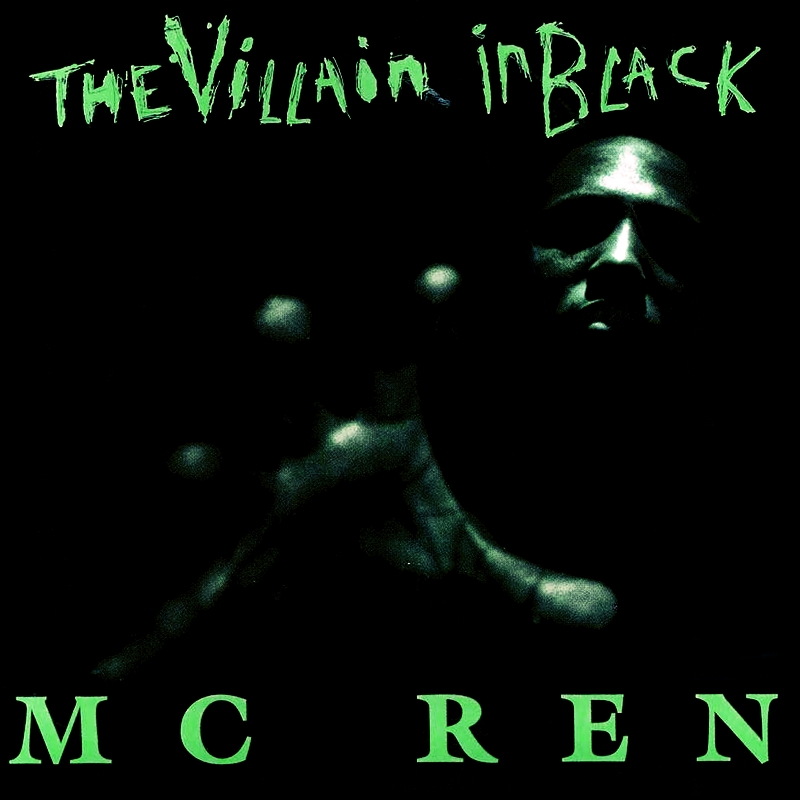 The Villain In Black is the second album by former N.W.A rapper, MC Ren, released April 9, 1996, on Ruthless Records and distributed by Relativity Records. It’s due for it’s twenty-first anniversary very soon and, for an often overlooked member of the aforementioned rap super group, he came forward with quite a significant body of work in this sophomore effort.

The story goes, after the deaths of Eazy-E and collaborator, DJ Train, he had a bit of a career crisis. In fact, he scrapped all the work he did with the latter and started all over again. This is similar to the crossroads he came to after the release of his debut EP, the bluntly titled Kizz My Black Azz, in 1992.

This had gone platinum after two months, and was released as a promotion for the apparently upcoming album, to be titled Life Sentence. However, in the middle of the recording of the Life Sentence album, MC Ren suddenly joined the Nation Of Islam and converted to Islam with the help of his DJ and friend, the said DJ Train. So came debut album, Shock Of The Hour in 1993.

The album cover is Ren, hand outstretched, towards the listener. The primary colour is black, with the secondary colour of green evoking some sort of rap bogeyman. It’s dark, dank and very creepy. Both colours seem like some sort of imagery hint towards an, at the time, prepubescent horrorcore rap scene. In many respects, after all, gangsta rap is the rightful father of such a brutal sub genre.

Anyway, the opening track, “B*tch Made N*gga Killa”, rings in ominous, bass impossibly low. The harsh hit of the drum and those wavy synth lines let you know it’s a West Coast track.

“This ain’t a bang-bang boogie like the new booty flow/New niggas tryin’ to do the shit I did years ago” also lets you know flattery won’t incur a kind smile from Ren, hardcore and ruthless as ever. This is all amidst scratches of classic, “You know the colour, the villain’s in black”, Ren N.W.A (“If It Ain’t Ruff”).

Then Ren says “Keep It Real”, with those fat basslines and hazy melodies assuring you of a more kicked back West Coast flavour. “My robbin’ train go and get a deuce/And n*ggas around the way don’t give a damn about a gang truce” show how, indeed, he’s rooted in the real, and not hoping for pipe dreams of peace on the streets.

A middle section sees things get funky, the vibes permeating with a toxic blend. Intoxicating. “That pork’s full of germs” really lets you know his delving into Nation Of Islam.

“It’s Like That”, featuring Bigg Rocc, up next. This one seems to mix the foreboding feel of the opener and what just came previous. Deep yet funky, basically. “…and then it’ll be on, like some after school sh*t/F*ck a gun, I got to knuckles saying I’m getting one” seems like a turn on his N.W.A days disposing of police officers with the pull of the trigger.

The melody is deeply processed, blurring the line between guitar, synths and keyboards. “I be the n*gga that put Compton on the map”, however, is one thing you can be assured of having no grey areas to consider.

Then the “Mad Scientist” is low, deep and perhaps another nod towards affiliation to Nation Of Islam. Maybe venturing into the territory of the mad scientist who created the devil white man. Then, with the blare of, “Who is it, the black n*gga called Ren”, you wonder, in some twisted way, if the mad scientist is actually MC Ren himself?

He recalls the heady days of hip-hop, doffing his baseball cap to Boogie Down Productions and Ice T. Maybe he’s the chemist concocting new hip-hop flavours to continue the work of the aforementioned torch bearers?

The lively “Live From Compton ‘Saturday Night’”, featuring Cold 187um, comes next. This one begins with a skit, a phone call ringing out to MC Ren’s answer machine. “N*ggas you know I ain’t no motherf*ckin’ comic/Droppin’ street knowledge, plus a n*gga Islamic” a line affirming he isn’t a cut out character, all amidst wailing rock guitar and grim horror movie tinkling of the piano.

His flow cadences as adeptly as it did on N.W.A tracks, like the aforementioned “If It Ain’t Ruff”, skipping through the beat with expert alacrity.

“Still The Same N*gga” begins with another skit, basically some homeboys seeking to gun down the rapper. You hear a gunshot and you know, somehow, obviously, that he’s not the one left cold, dead and lying on the pavement. The song proper commences and it’s menacing, maybe horrorcore to the point it delves into demonic rap sound.

“I used to be a magician, but a n*gga gave up tricks/’cos my assistant was f*ckin’ too many d*cks” is somewhat humorous braggadocio. An aside to the pure evil in progress. “F*ck the radio format/I got B*tch Made N*gga Killa on my doormat” furthers this, recalling a desire for rap rugged and raw.

“I Don’t Give A Damn” hammers industrial, harsh drums and intermittent bass groove their infectious, toxic rhythms. Nightmarish melody waves over the top, eerie and disconcerting. “I made this shit with real n*ggas back in ‘87” tells you he really doesn’t give a damn, highlighting and proving so. The backdrop is left to marinate, a power of noise akin to something you might hear from Public Enemy’s very own Bomb Squad.

There’s the high watt power of “Mind Blown”, featuring Bigg Rocc. “I’m shockin’ motherf*ckers like water and a live wire/Makin’ niggas feel the fire like Richard Pryor” an expert witty line, “a nuclear bomb couldn’t stop me” perhaps even more so. Indeed, some of those classic lines are inclined to have your mind blown.

Then you’re told, “I put fear/In n*ggas ears”, reminding you why, technically, he was the premier hardcore emcee in N.W.A. The closing moments are calm, as if to let what you’ve heard sink in, a slight booming seeming to convey meltdown of the mind. Your own mental Hiroshima.

“Great Elephant” sees Ren’s voice slightly modulated, to sound as all-encompassing as, yes, the mighty elephant. Stomping with assured authority. Clanging piano and emphatic claps of drum further this feel. “Ain’t no watered down n*ggas on these streets/And ain’t no watered down rhymes with these beats” seems to imply a whole animal kingdom upon where Ren resides, all predators and no game.

The intermission of “Muhammed Speaks”, featuring Khalid Muhammad, is a grave skit that perhaps conveys Ren’s political conscience far beyond aspects of his braggadocio hardcore style. “Hoping that the baby will be born, afraid of a wicked slave master” seems like a cue for the listener to remember the defiance in the mind, body and soul of Ren himself.

Closing is the challenge of “Bring It On”, featuring Above The Law, Triggerman and Khalid Muhammad. This one’s also grave, a definite sequel to the sentiments expressed in the aforementioned skit. It’s like the final stand, almost apocalyptic in how it strides forward, unrelenting and tough beyond words. The emphatic clap of the drum, the ring of that bleak piano.

The latter element searches, becoming tuneful as if to convey true soul expression, beauty and letting one’s wings unfold. This then ends with fanfare and cheering. Is this victory on some level?

There are some emphatic tracks on this album, with “B*tch Made N*gga Killa”, “Keep It Real”, “It’s Like That”, “Mad Scientist”, “I Don’t Give A Damn”, “Mind Blown”, “Great Elephant” and “Bring It On”. This ensures, roughly speaking, that the first four are more than good, not too bad in the middle and almost as good come the last four or five.

MC Ren definitely puts across raps very much in line with what’s said on the tin. The Villain In Black, indeed. There are glimpses of an intellectual at work, with the Nation Of Islam references, but in the majority of cases it’s hardcore emceeing at play. MC Ren’s The Villain In Black can be bought on iTunes here.