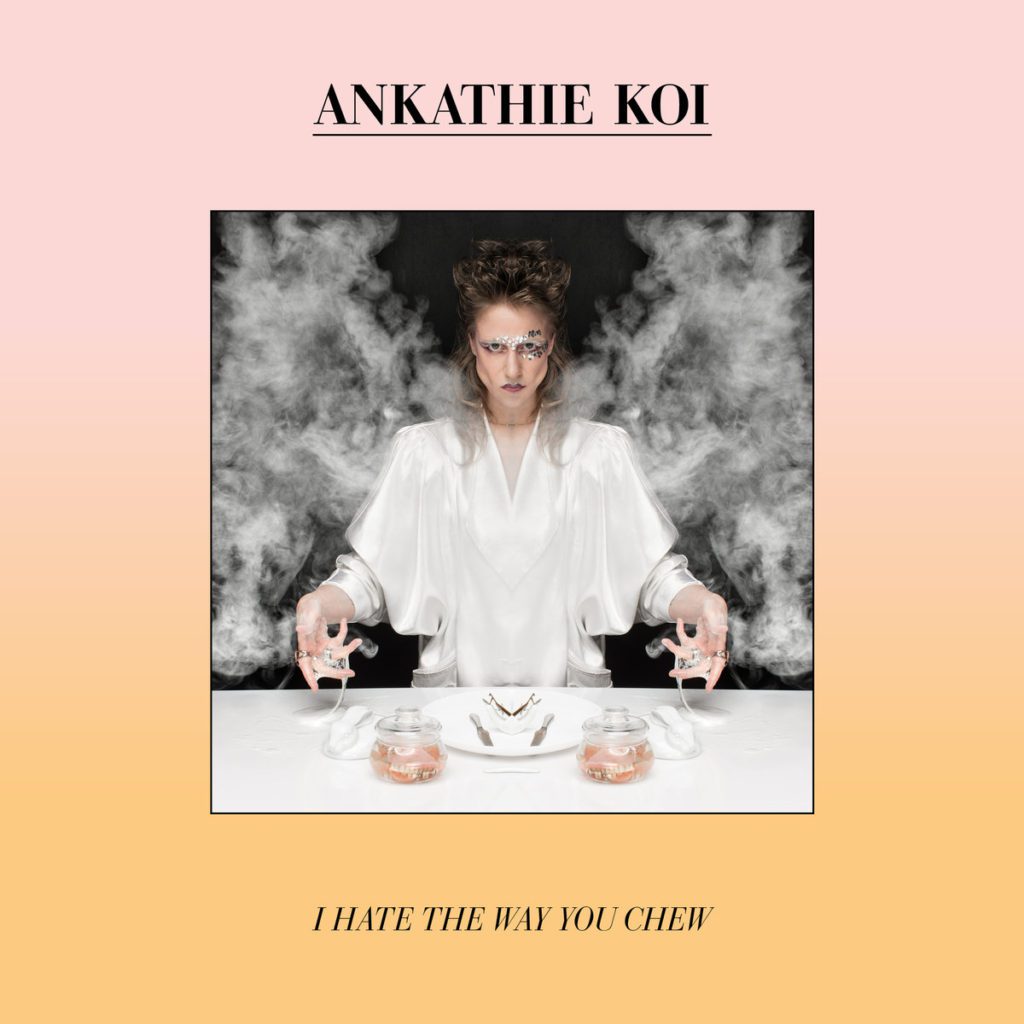 “Just because you think I’m tacky, doesn’t mean you have good taste” is a bold line from finger-clicking electronica track “Loose“. From a large castle town in Germany called Burghausen that borders on Austria, this is a confrontational and intimating musician who doesn’t care what anyone thinks.

Ankathie Koi is not a hardcore punk wannabe in the frame of GG Allin, nor similar to Marilyn Manson’s controversial metal, she makes electro-pop music with scolding yet humour-filled lyrics, that occasionally verges on 80’s cheese and is unashamedly and consciously aware of it. Her music and accompanying video promos can be defined as an acquired taste but what makes her original and noteworthy is her eccentric attitude, over-the-top personality and self-created persona.

The theatrics are the mastermind of Kathi Winklbauer, a singer-songwriter who has switched from the folk-leanings of her previous project Fijuka (a duo with bassist Judith Filimonova) to something more danceable and inspired by glam-ness and cross-sexual clothing of Ziggy Stardust and vocal stylings of Annie Lennox.

From the title alone of Ankathie Koi’s debut record I Hate The Way You Chew, it’s clear that the German doesn’t hold back on her opinons and insults. Lines such as “I’m the cashew you’re allergic to“, “you pretty dumb girl with your dumb eyes and stupid car“, “I can be mean, I can make your life a little hell” and “she will break down your pride and make your heart sing“, from “Black Mamba“, “Loose“, “Little Hell” and “Hurricane” respectively are weirdly entertaining.

In fact it’s a shame there isn’t more of those spread across the album, especially as it fits the blood-curdling apperance of the album sleeve – reminescent of Bette Milder’s witch from Hocus Pocus- and expands upon the playful bullying in the aforementioned “Little Hell” music video.

The prose and perspective on the album can be a little confusing though. Although it seems initially that Kathi Winklbauer writes in the form of invented character, occasionally written in the 3rd person and sometimes androgynously (hear “Fruitflesh“), the obsessive title “I Am Jealous Of My Boyfriend’s Past” and the fact that the album’s name comes from Kathi Winklbauer’s misophony condition in which certain sounds cause rage and discomfort and in her case, it’s the act of chewing gum, means that it’s somewhere between confessional and exaggerated expression.

Musically, I Hate The Way Chew is shiny, simplistic and obviously inspired by 80’s pop music credentials. Sounding geninuely like the greatest hits of that decade, there’s the synth-spirals of The Thompson Twins, the sugary gidiness of Cyndi Lauper, the keyboard keys of ABC all laced together by a production that sounds like a karoake immitation of Italo-disco’s Giorgio Moroder.

One of the highlights of the LP is Ankathie Koi’s antagonistic speeches (“Hurricane” and “Black Mamba”) which spring to mind Madonna in “Justify My Love” and “Vogue” and the equally confident Grace Jones, although this style of vocalisation has recently been ultilized and associated with Roisin Murphy. It’s worth noting that at her most straight-forward such as “Foreign Heart (Carribbean Theme)“, Ankathie Koi can can even sound like a mix of Stevie Nicks and Deborah Harry.

This mixed bag of sweets can perhaps be explained by what the extroverted Kathi Winklbauer once said in an interview “I feed the Koi Project until it’s thick and bulging. I want to live out at the moment everything that comes to my mind“. I Hate The Way You Chew might lack a direction and invention at times but it’s nod to the past and it’s smile-encouraging anthems is a distracting antidote to the seriousness of the world today.

Out now on Seayou Records, purchase Ankathie Koi’s I Hate The Way You Chew on iTunes here.