2002, a few musically thriving people, a London pub and a pack of heart-shaped post-it notes. Just like that, the soul-stirring music fest of Lovebox was born. Before that, Lovebox was the fourth album from Groove Armada, an English electronica duo. They were consumed with the London party scene, playing gigs and clubs all around. They believed that there must be a different way to put on a show in our much-loved capital city, and now we have Lovebox Festival.

Notepads and pens to the ready, the following dates need to be engraved into your brain: Lovebox Festival, July 14-15, 2017.

Now, let me tell you a little bit about the festival that celebrates our love for good music.

Lovebox takes place in Victoria Park. Known for being one of the most historic and largest parks in Tower Hamlets, it boasts over 9 million visitors per year, with fantastic tourist links. So, if you fancy going to this festival (which you most certainly should do), perhaps take a visit to the Queen Elizabeth Olympic Park; it’s virtually next door to the venue.

With the likes of Stormzy, Katy B and Run The Jewels headlining in 2016, the excitement started to build to see if Lovebox could top their previous line-ups this year… Oh, I would say they certainly managed that!

“When my skin grows old” Mr Rag’n’Bone Man will be showcasing his skills on the main stage on Friday, July 14. This should excite you immensely. His brain-shattering vocals mixed with his contemporary yet old school blues will have you questioning if you’re even ‘Human’ at all.

Another cracking star will be gracing the main stage over the weekend. American singer and songwriter Frank Ocean. Known for his deviant and peculiar style, Ocean has sure delivered some spectacular musical extravaganzas.

His 2016 album Blonde, featuring guest appearances from the likes of Queen B (Beyoncé) and chart-topping rapper Kendrick Lamar, sent fans into a frenzy with its atmospheric, slow-moving, velvety smooth sounds that transport you to a place of ultimate intrigue.

Along with Frank Ocean and Rag’n’Bone Man, Friday’s line-up will also feature Mac Miller and Jamie XX on the main stage, as well as Solange, Sampha, Kaytranada and Ray BLK on the Noisey stage, just to mention a few.

Saturday, July 15, will see another host of musical legends take to the main stage. From the likes of Anne-Marie, Annie Mac, Kano and the fabulous Jess Glynne, Lovebox really isn’t a festival to be missed this year.

Headlining on the Saturday will be electronic music geniuses Chase & Status. Having collaborating with the likes of Rihanna, Plan B and Tinie Tempah, Chase & Status will forever be a pair of legends that will musically blow-up the stage with their big beat electronic vibes.

The duos’ 2011 release No More Idols, went double platinum, while their latest album Brand New Machine debuted at number 2 on the UK album charts in 2013. Now that’s something to shout about. The pair are back now, and a fourth album is on the cards, to be released later this year. Check them out at Lovebox, then watch this space.

Lovebox is not just aimed at the over 18’s. So, if you fancy getting the family together for a weekend of music, dance and arts, you are more than welcome too. Under 18’s must be accompanied by an adult, and under 12’s go in for free (as long as they are accompanied by an over 18 ticket holder!), it’ll be hot too, so stock up on sun lotion before you go!

You’ll still have a rocking time at Lovebox if you’re an adult of course, with plenty of bars on site to purchase non-alcoholic or alcoholic beverages. Remember the ID though folks!

If you’re big into volunteering at festivals then Lovebox is the one to put at the top of your list. War Child, is a charity that stands up for the rights of children facing severe conflict, and volunteering as a steward at Lovebox will help this cause – you can apply to volunteer here.

You can get your festival tickets on Ticketmaster. Unfortunately, Friday tickets appear to have sold out. However, Saturday adult tickets, Saturday VIP tickets, 2 day tickets and 2 day VIP’s, are still very much available! A VIP ticket is there to give you a real treat, an excitement fuelled experience to make you feel extra special and well looked after. VIP includes fast track entry, a backstage area near the artists themselves, a dining area where you can order luxury food, and even a VIP bar to enjoy extra special cocktails, wines, beers, and spirits.

I truly believe Lovebox will be an experience that every music lover should attend. It caters for all music tastes, and you can do anything from volunteering to VIP’ing it up. A family, a first-time festival goer, a euphoric music lover; which one are you? Lovebox will have you all this summer. Get your tickets here. 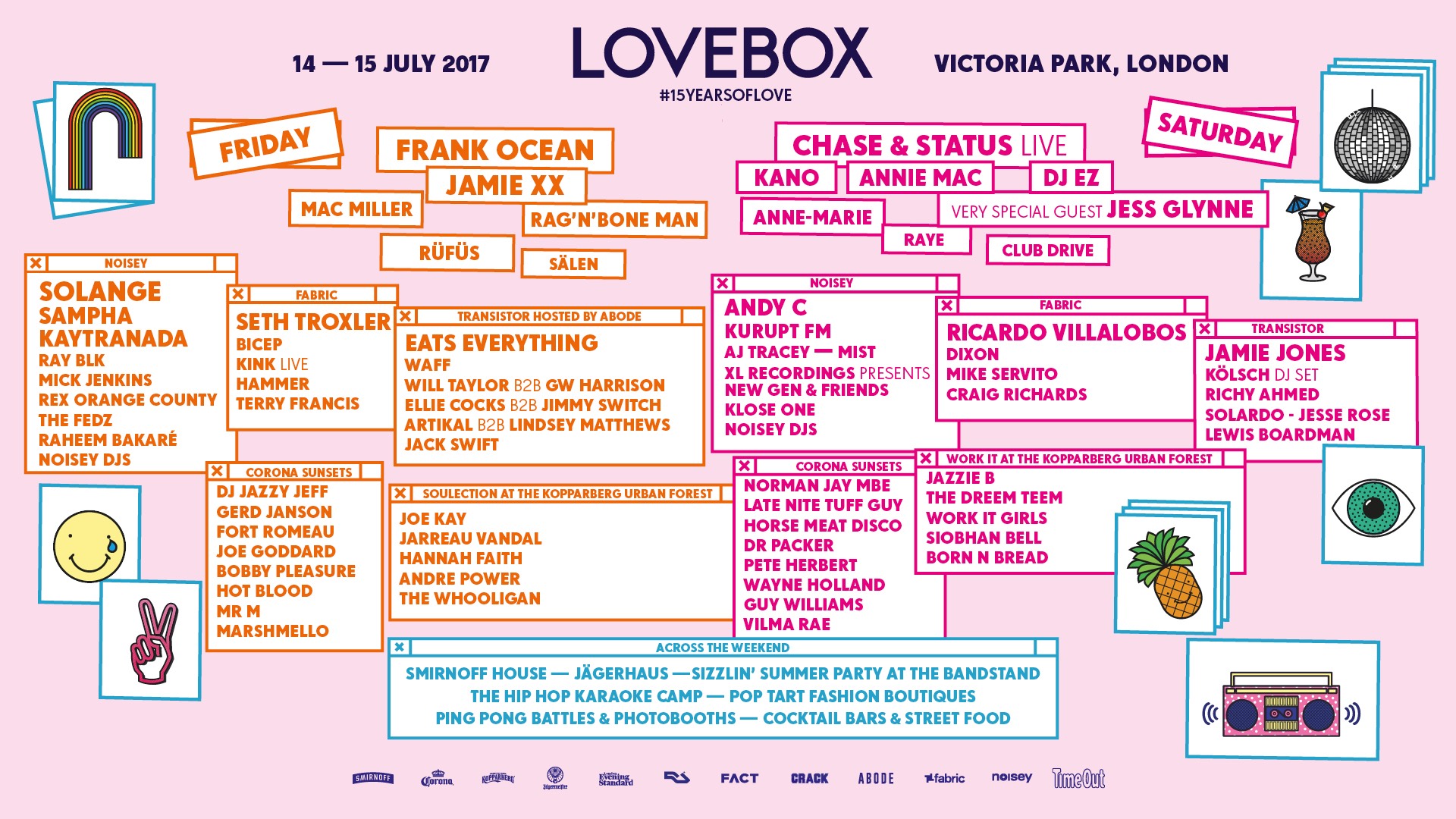