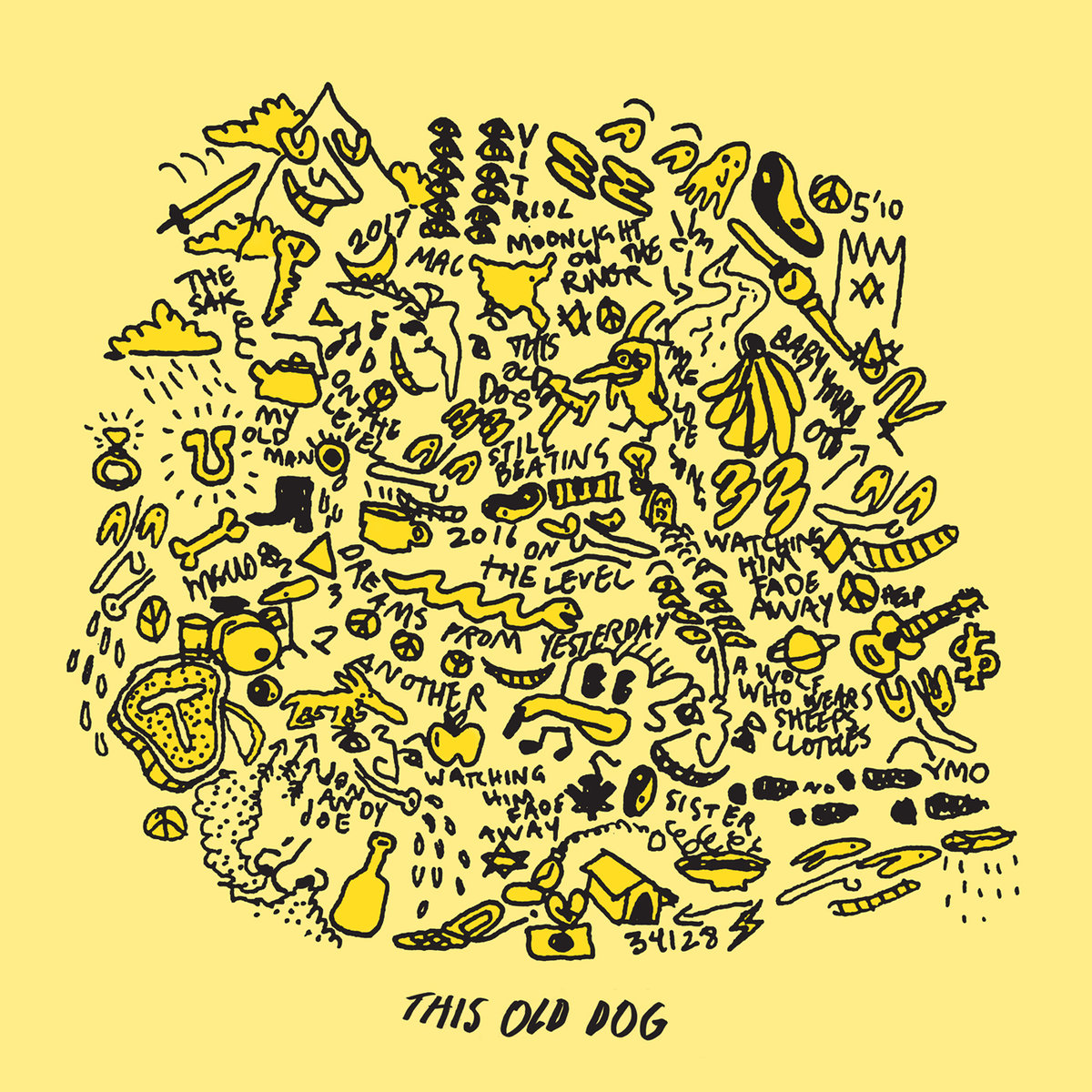 On May 5, Mac DeMarco released This Old Dog a collection of 13, highly personal, acoustically driven tracks, all of which are masterpieces in their own right. The record retains DeMarco’s characteristic song writing style.

However his minimalistic use of instrumentation signifies a shift in perspective towards the 26 year old’s production style. In This Old Dog, Mac DeMarco, offers a number of stripped back tracks which allow his lyrical sensitivity and creativity to take centre stage.

The depth of each and every song on this album (his first full length record since 2014’s Salad Days), could perhaps have something to do with DeMarco’s recent change in lifestyle. He moved from Queens to Los Angeles with a bunch of demos for the album still unfinished. It seems this change in scene, and the time taken to settle into his new home allowed for a new perspective on things to form, as well as the time to really get to know the songs intended for the record.

This heightened perspective is clear from the off. Album opener and previously released single, “My Old Man” taps into an anxiety I feel myself and most other 20 somethings can certainly relate to.

DeMarco sings: “look in the mirror, what you see? Someone familiar but surely not me”, and in doing so immediately confronts the worrying idea that as time passes, those parental characteristics we all strived against when we were younger, are now beginning to transfer onto ourselves.

The use of DeMarco’s trusty CR-78 drum machine, four chords on an acoustic guitar and little else, allows DeMarco to offer a more sensitive portrayal of himself. Many characterise Mac by his easeful sense of humour, and yes, he’s a funny guy, but it seems this track demonstrates DeMarco’s incredible ability to perceive change and personal difficulties through an artistic lens and then form these observations into accessible and highly relatable slacker tunes.

The following track, “This Old Dog” expands on the theme of Age established in “My Old Man”. With its solitary acoustic guitar, minimalistic drumming style, and synth drenched choruses, this track plays out like a love letter, a promise that those original lakes of affection have not dried up over time.

This further highlights DeMarco’s awareness of the passing of time, and its effect on his attitude, firmly establishing the record as something of a documentation of those inner anxieties which affect us all.

Ambling forward with a care-free swagger, “Baby You’re Out” pulsates with an almost Afrobeat infused groove. This, combined with the easeful Country style guitar lines basks the ears in the balminess of the summer sun.

As sparkling analogue synths burst into life, “For The First Time” induces an 80’s nostalgia and evokes the vapourwave infused “Chamber of Reflection” from Salad Days. These instrumental allusions seem to highlight the subject of memory, one which permeates DeMarco’s lyrics on this track. “It’s just like seeing her for the first time”, he sings. Indeed, listening to this track is just like listening to Salad Days for the first time.

Next up, “One Another“. This track develops DeMarco’s lyrical focus on love and companionship. The acoustic guitar still dominates the mix. However this song begins to rectify the absence of his trademark jangly electric guitar riffs, saturated with chorus and dripping with vibe.

However, as “Still Beating” jives its way out of the speakers, we are introduced to what I believe has to be one of the most infatuating Mac-riffs ever written. It traverses the line between happiness and melancholy perfectly, oozing a jazz-infused slacker ambiance.

As the line: “my heart still beats for you, even though you don’t feel it”, floats above the mix, DeMarco addresses the difficulties that affect long-term, and maybe even long distance (Mac tours more than any other musician I know of) relationships. This song says: I might be miles away, but I love you all the same.

The ephemeral, “Sister” indicates a shift towards more melancholic territory. With a reference back to the album title, Mac sings “Turns out not every dog has his day. So sad, so suddenly gone away”. The warm, muffled solo guitar creates a sense of mournful sorrow as the ode to the eponymous sister plays out, driven by compassion.

Moving back into nostalgic territory once again, “Dreams Of Yesterday” evokes a wistful melancholy for bygone days. The pops and snaps of the CR-78 sit alongside lush analogue synth pads and a delicate chord progression, almost mimicking the sound of elevator music. In this track, DeMarco seems to suggest that if life is an elevator, it’s moving too fast for him.

“Wolf In Sheep’s Clothing” offers a swift change in tone, as the trills of bluesy guitar licks and Dylan-esque harmonica set to an upbeat, cheerful pace arouse a subtle 60’s atmosphere.

As we approach the final section of the album, we are offered “One More Love Song“, the chord progression and tempo of which again hark back to “Chamber Of Reflection”. However this subtle use of artistic recycling is disguised through DeMarco’s use of instrumentation. Gushes of Mellow electric keys frequently switch to expansive grand piano as the choruses approach, until finally they blend together in a moment of Prince-like (the artist formerly known as) ecstasy.

“On The Level” sees the return of that sparkling, iridescent synth heard in “For The First Time”. However, in this track, Demarco offers us a track infinitely more moody and soulful. The heavy use of reverb, and electric piano chords highlight subtle infusions of 90’s house, demonstrating DeMarco’s remarkable ability to draw inspiration from a multitude of genres and use them to form a perfectly unique sound.

Perhaps the most, sonically multifaceted ditty this album has to offer is “Moonlight On The River“. Whether it’s pure coincidence or not, DeMarco delivers a song, the lyrical quality of which echoes the verse of the lake poets.

With the sparse, pitch bent warbles of lead guitar, DeMarco sings: “Its Moonlight on the river, everybody dies“, forming a densely layered metaphor for the transient nature of life, time and human relationships. Eventually the track explodes into a sonically explorative wig-out, mirroring the Shoegaze tinted noise of Deerhunter.

DeMarco leaves the most touching and sensitively approached song till last with “Watching Him Fade Away“. This track is comprised of a solo electric piano and vocals, allowing the heartfelt subject matter space to resonate as it deserves to.

The first lyrics we hear are: “Haven’t got the guts to call him up, walk around as if you never cared in the first place”. In this, we can see how DeMarco has used this song as a space in itself, one in which he explores and meditates on that sense of obligation we all feel to those we love.

It can be argued, that this entire album acts as a cathartic space for the Canadian slacker-songwriter, Mac DeMarco to tackle a number of deeply personal anxieties, ones which afflict all of us in everyday life. This album is in constant fluctuation. It switches from care free joviality to melancholic introspection in a matter of seconds, reflecting the emotional state of not just DeMarco himself, but pretty much every person on the planet.

Life is made of ups and downs, worries and sureties, loves and hates; What Mac DeMarco succeeds in doing with this album, is cataloguing those feelings and synthesising them into something which can bring comfort to whoever chooses to listen. I beg of you, do listen. You won’t regret it. Purchase This Old Dog on Bandcamp here.