It’s less than 3 weeks till the very highly anticipated Leeds Festival returns to Bramham Park on the summer bank holiday weekend (25-27 August, 2017). Over 100 acts have been announced to grace the festivals’ six stages and it’s promised to be a very impressive eclectic line-up of mainstream underground, rock, pop, metal, alt-rock, pop-punk, R&B, hip-hop and electronic tunes. The more popularly known Reading Festival will take place concurrently over the same weekend and is generally a mirror image of all the performances.

Muse, Eminem and Kasabian will headline the festival weekend and will be joined on the main stage by Bastille, Liam Gallagher, Two Door Cinema Club, At the Drive In, GIGGS, PVRIS and many more.

These are some of the artists that WPGM will not want to miss:

Hip-hop titan, Eminem will be returning four years after he last headlined the event in 2013 and will be closing out the festival in Leeds on Sunday. Being one of the biggest selling artists of the 21st century, his larger than life anthems like “Lose Yourself”, “My Name Is”, “Stan” and “Monster” all topped charts around the world for a very long time, his return to Reading and Leeds is an extremely rare opportunity to see an icon in the flesh.

Following his promotional tour for his eighth album, The Marshall Mathers LP 2, Eminem has been keeping things on the low-down, excluding an appearance in Brazil’s Lollapalooza Festival about a year ago and more recently contributing to a verse on Big Sean’s song “No Favors”. However, he confirmed last October that there is a new album in the pipeline.

Grammy-award winning three-piece, Muse will be returning for a third year, having previously headlined in 2006 and 2011. The British trio’s new album, The 2nd Law will be out in October this year. Their first single from the album titled, “Dig Down” has been doing well on UK charts, and fans can look forward to hopefully hearing a few more new tracks from the album at the festival. New or not, their performance is always a sight to be seen and they are known for their iconic and grandiose stage performances.

Kasabian proved themselves headliner quality back in 2012 and as they hit their 20th year, Kasabian have a sixth album set to be released this spring, and have over the years evolved from vintage classic rock, to electro infused dance-rock of their 2014 album 48:13. Their recent album, For Crying Out Loud, is said to be “about saving guitar music from the abyss”. Considered as one of Britain’s best live acts, their performance is always fun and leaves all attendees thoroughly satisfied.

Burnage-born and former Oasis front-man, Liam Gallagher will be performing on the main stage just before Muse on Friday in Leeds. Fans can look forward to a set list of Oasis classics plus tracks from his new album, and it is bound to be an attitude filled performance. Gallagher has revealed his new debut solo single is called “Not for Sale” which will be followed by a new album, As You Were later this year.

Bastille’s breakout album Bad Blood sold over 7 million copies, received coveted BRIT awards and catapulted this band to become one of the biggest bands on the planet. Their last LP Wild World was named as one of NME’s Albums of the Year 2016 and dominated charts with singles “Blame” and “Good Grief”, we cannot wait to see them live at this year’s Leeds Festival.

Also billed for Leeds Festival this year are indie-Pop Stockport band, Blossoms, who have their stage presence nailed. Their hugely successful debut album in August last year shot to the top of the charts, which spurred a sold-out UK tour. They were also the only guitar group to be featured on the Grime and R&B-heavy ‘BBC Sound of 2016’ list. They have already played Glastonbury this year and have an array of other major league festivals, already under their belts.

Joining them at Leeds Festival are alt-rockers, X Ambassadors, who have been named by Rolling Stone as one of the 10 Artists you need to know and has delivered chart-topping hits such as “Jungle”, “Renegades” and “Unsteady”, as well as Wiley – the Grime Godfather, King and veteran, who is deeply ingrained in the UK grime genre and considered to be a ground-breaking, musical innovator of the British music culture.

Live, the band is an unstoppable force that has been turning heads since inception. Speaking about their upcoming performance, front-lady Lynn said “We are incredibly happy to be performing again at Reading and Leeds. Our first experience at the festival was phenomenal and took us completely by surprise. We are excited to see comes from it this time”.

Highly acclaimed synth pop band from Oxford, Glass Animals have a reputation for their unique sound, and blend buttery R&B grooves with intoxicating indie-rock riffs. They are known to energise the crowd with jungle sounds, menacing beats, combined with their signature impressive lighting show, and they are not to be missed at this year’s Leed Festival.

The uniquely talented electronic producer and songwriter Mura Masa, will also be getting the crowd moving with a mix of low-key R&B and Pop, taken from his recently released critically acclaimed self-titled debut album.

The dance music superstars, Major Lazer, whose UK smash single, “Lean On” went to number two on the charts, are the ultimate package, that have been taking the world by storm with their exploration of Jamaican dancehall and reggae, sewn together with dubstep beats.

Others worth giving special mention at this year’s Leeds Festival include the likes of You Me At Six, Flume, HAIM, Two Door Cinema Club, At the Drive In and American rockers Jimmy Eat World.

Tickets for Leeds Festival 2017 can be purchased here, and you can find a full list of artists that will be performing this year here, while you can keep tabs on the festival and any new developments in the lead up to the festival via Facebook, Twitter and their official website. 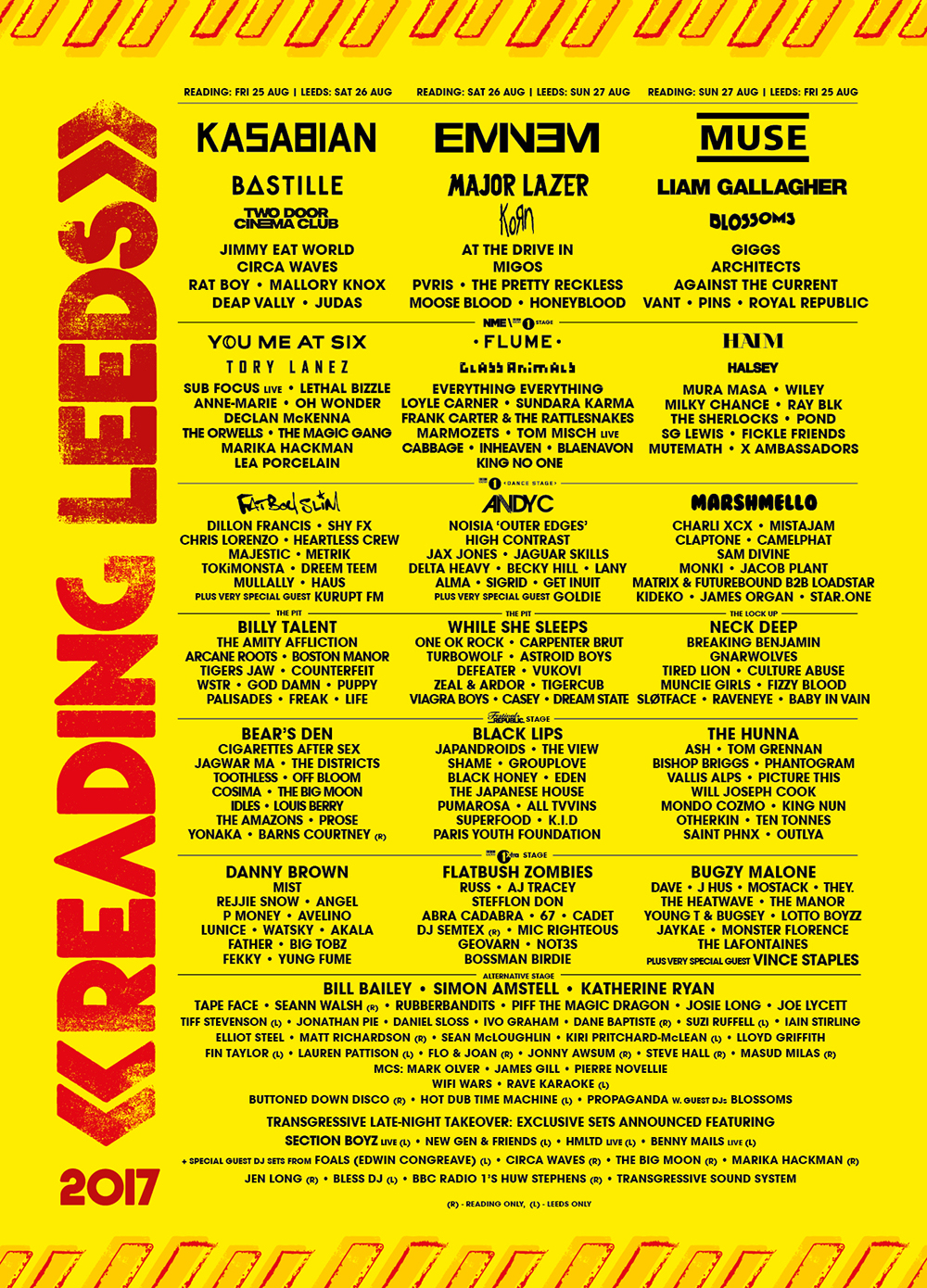