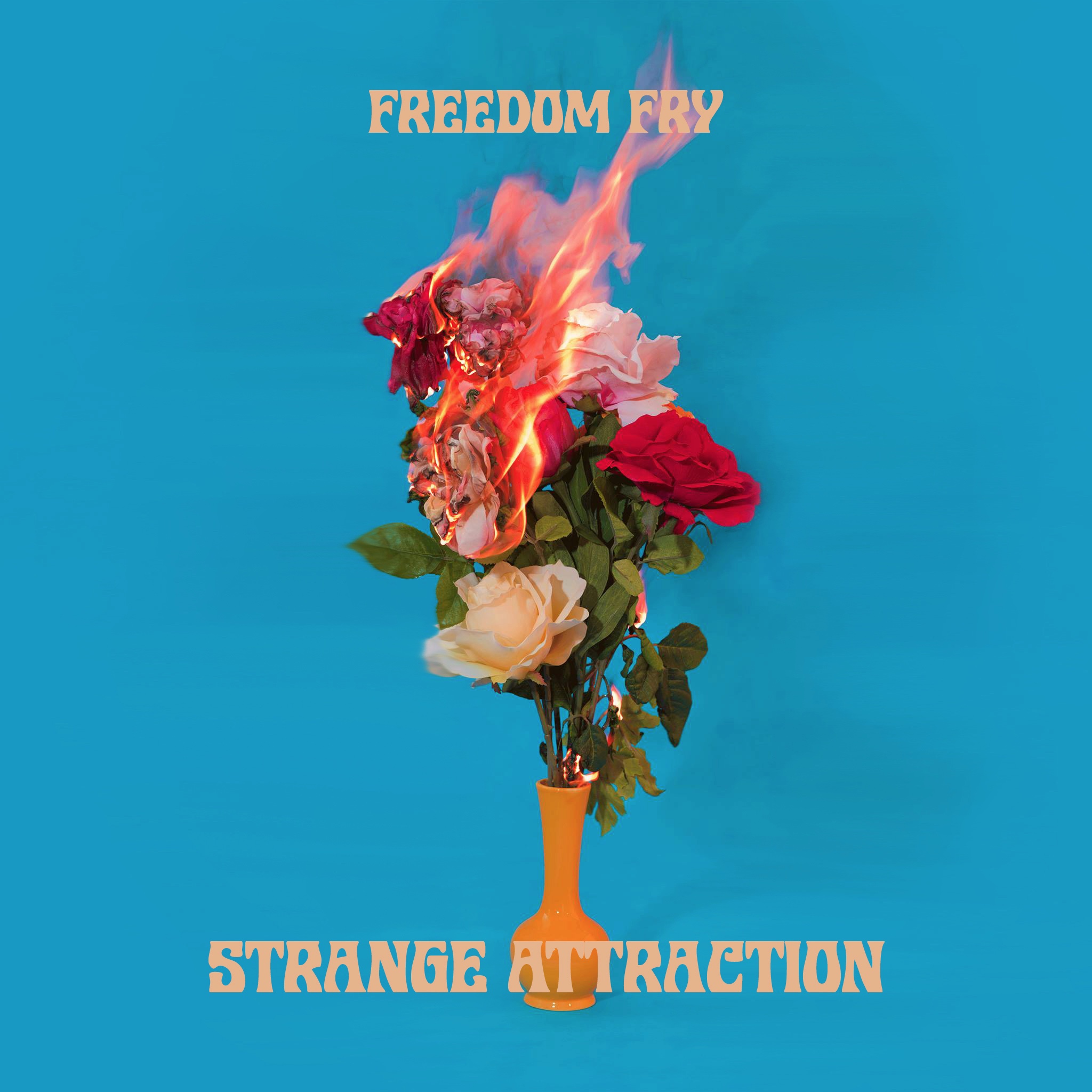 Freedom Fry are proliferous pop producing machines. Seven singles in 2017 alone is pretty good going. Perhaps more impressive however is the virtually unwavering quality of this songwriting duo’s output, with over 30 million spotify streams and 50+ appearance on Hype Machine, including three #1 spots. Their shiny new release Strange Attraction is no exception – Freedom Fry are no flash in the pan, so expect big things.

When we talk about Freedom Fry, a super tight blend of jangly, reverb-coated guitar and infectiously upbeat melodies springs to mind. Strange Attraction is just the right amount of deviation from this, and listens like an assured and addictive piece of indie pop with a couple twists to keep you hooked.

Our title track opens like every Freedom Fry song – a slightly surf-y guitar riff, an overwhelmingly West-Coast vibe (driven home – in case you missed it – by the offer to “spend the summer loving” in California with them. Any takers?) Exceptionally groovy bass line and crooning, androgynously interchangeable vocals follow.

Lyrically, this is familiar territory: hedonistic euphoria of the eternal youth variety. Listen to any Freedom Fry song and enter a world where we sit around the pool, “worry about nothing” and fall in love with “everyone and everything”.

Indeed, I’m not entirely sure anyone gets much done in between sleeping with each other and staying awake for apparently inhuman lengths of time (think Napoleon or 21). None of this is new – this track is a perfect piece of evidence for what Freedom Fry do best: three minutes and forty-two seconds of automatic party, designed to make you feel like a bit of a badass while you do the dishes.

“Party Down” is perhaps of most interest, and I would argue it’s the strongest track on the EP. They know it too – it was pre-released with Noisey, and Indie Shuffle are already singing its praises, amongst others. Each layer of this song is pretty irresistible; the earworm keyboard loop, followed by their funkiest bass to date.

The wandering vocal from Driscoll feels like a Californian take on what UK groups like Metronomy are channeling. This song is more structurally complex than some of what Freedom Fry have gotten away with in the past (think Shaky Ground) and it pays dividends: the whole thing is genuinely as convincing as the opening would suggest.

This is really exciting, because we are now transcending the just-catchy into the big-things stakes, if you’ll suspend disbelief long enough to pretend these stakes exist. Queue this at a party if you want to look cool whilst retaining the favour of the masses.

“The Words” feels a bit MGMT circa Oracular Spectacular – immediately stuck in your head, hazy equivocal moaning that you can still dance to. Freedom Fry have been accused in the past of sounding too much like an imitation of larger groups, and this perhaps rings momentarily true – the build up/chorus has a somewhat unoriginal melodic progression (even if you can’t place it, you’ll hear it – weirdly, I’m getting Maroon fives’ This Love).

Arguably, you can’t produce a long discography of the supremely listenable and danceable without a bit of inspiration from the majors, so I’m inclined to be forgiving since I’m so excited about “Party Down”.

Despite its synonymy with Grouplove’s song, “Adios Amigos” is also refreshingly original. Keep thinking Oracular Spectacular, because this bridge is like the best moments of “Fourth Dimensional Transition” and an assertion that Freedom Fry do in fact possess their own great sound/a soul behind a superhuman capacity for popping out singles.

Strange Attraction feels like Freedom Fry on the cusp of “Great Things”. No one is questioning their ability to write music you can’t stop listening to – and now that’s out of the way, I’m excited to witness them continue to get that bit bolder with their sound and get themselves some more, well-earned recognition.