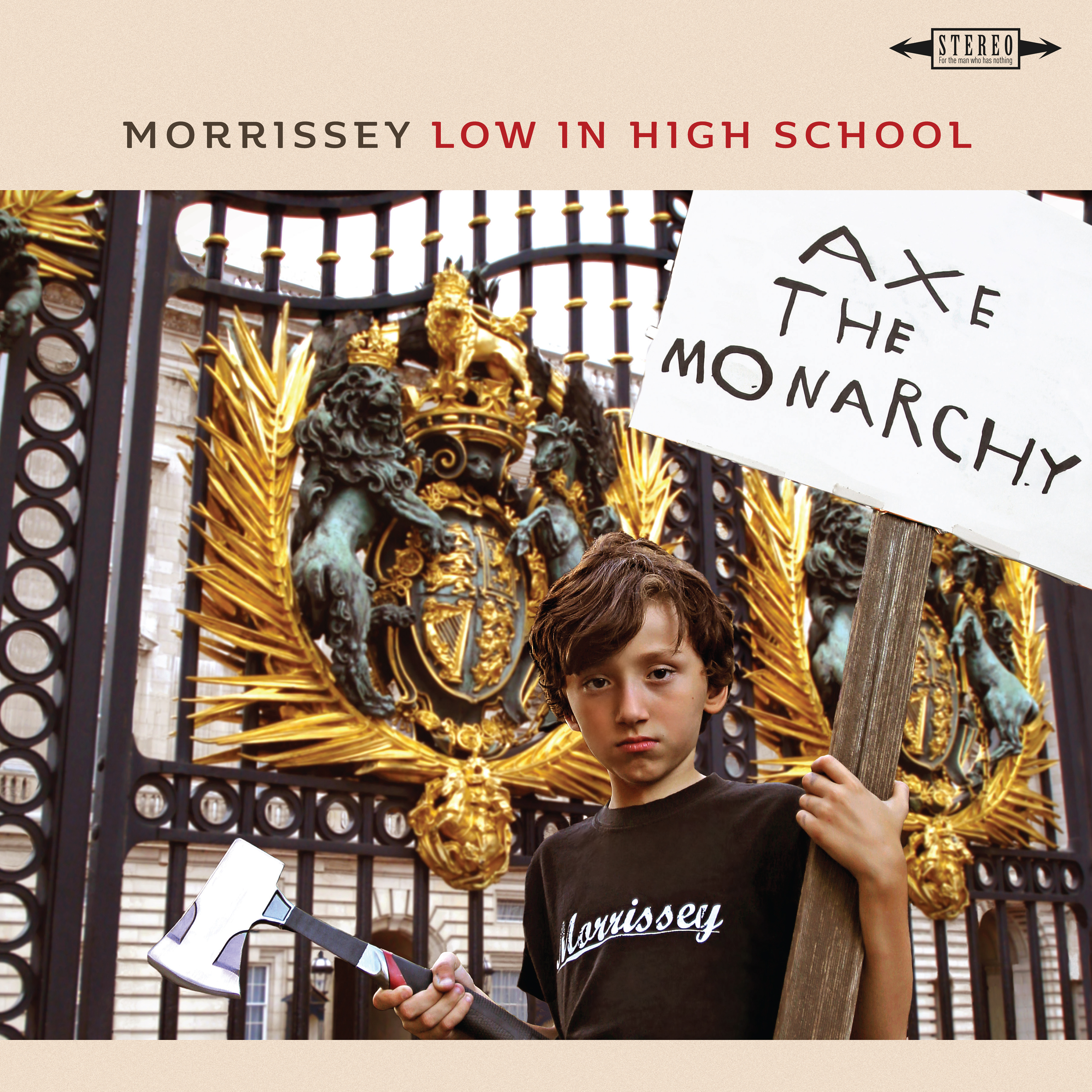 Morrissey has been embroiled in controversy since day one – and he loves it. Perhaps the most famous album in his discography is the overtly troublemaking The Queen Is Dead. His first LP includes several minutes of grotesque discussion of the Moors Murders. When Morrissey releases anything, political fallout is a necessary byproduct.

Low In Highschool is Morrissey’s first peep since World Peace Is None of Your Business, which actually peaked at number two on the UK charts in 2014, but sold significantly less well than previous efforts and did not overwhelm me at time of release.

I will confess – I am a die-hard Smiths fan and my solo-Morrissey tolerance has probably declined gently since around Vauxhall And I. But I’d argue my decaying enthusiasm probably allows a more objective analysis than if I were one of the longterm navel-gazers who’ve allow such a rogue celebrity mainstream success.

Rogue here is the operative word, because at the time of writing, Morrissey is up to his elbows in scandal, for second guessing the motives of victims in the recent sexual assault scandals. Obviously I’m not here to discuss politics but I think it would be a gross oversight to not at least acknowledge the fact that Morrissey seems frustratingly determined to retain his title of the unerringly inflammatory.

As a warning, this sort of characterises the new album lyrically: Low In Highschool is rife with generalisations and hysteria, but I think there’s more to it than meets the eye.

The opening track “My Love, I’d Do Anything For You” is a roaring bit of rock and roll. Fuelled by slide guitar, this has one of the album’s more compelling hooks in the chorus. You can feel the effort that went into this song, which is rather nice from a self-indulgent star after eleven studio albums.

“I Wish You Lonely” feels, conversely, like it could have been buried on any of those eleven albums. ‘Whiny Outcast’ has been a well-loved Morrissey identity from the outset, but this feels like a lazy amalgamation of discontent in love, drugs, politics – you name it. I’m not convinced, but it’s pretty easy listening.

Comical and poignant narrative – more suited to a piece of prose than a pop song – is a classic Morrissey-ism that is delicately illustrated in “Jackie’s Only Happy When She’s Up On The Stage”. The aggressive “Exit” outro ensures you don’t miss his Brexit analogy.

However, on first listen I found a more convincing likeness between the ficticious “Lost And Lonely” attention-driven “Jackie” and the singer himself. Either way, this is more tasteful wordplay, and reverb-heavy guitar makes this worth a thorough listen.

Moody guitar lines persist into “Home Is A Question Mark”. This one is pretty self explanatory: harmless, but not really offering anything we haven’t heard before. A quick way to satisfy the stalwart supporters, and gives the impression that it would lend itself rather well to a stadium tour.

“Spent The Day In Bed” has a mildly awful music video, but a great groove. It’s simple, pure, Morrissey: what you see is what you get, lyrically. He’s narcissistic, a bit immature, but certainly comic and earnest – the original divisive character that garnered such a name for himself.

The chorus encouraging listeners to “stop reading the news” feels a bit poignant with all the current fake news issues. It’s a love-it-or-hate-it kind of song, but I think it’s undeniably a quality piece of music; my only hesitation is the fact that it sounds somewhat overproduced, and very slick.

Political commentary is more or less the measure of “Israel”, “I Bury The Living” and, unsurprisingly, “Who Will Protect Us From The Police?”.

It’s still definitely nice to see pop music with a message and a purpose behind it, but this permanent subversive ‘troublemaker’ persona of Morrissey sometimes threatens my belief in the genuine sincerity of his messages. Nonetheless, he was at the forefront of this pop-with-a-purpose phenomenon, and the legacy is still prevalent, so I will cut him some slack.

To conclude, this album is the most Morrissey-esque Morrissey album I have heard in years (which sounds amusingly paradoxical), and that is either a great or a terrible thing. There are some compelling and well written songs illustrating all of the lyrical imagery and wordplay we have come to know and love. There is plenty for the isolated wallflower to find solace in. There is even more for the irate knee-jerk socialist to advocate. Make of it what you will.