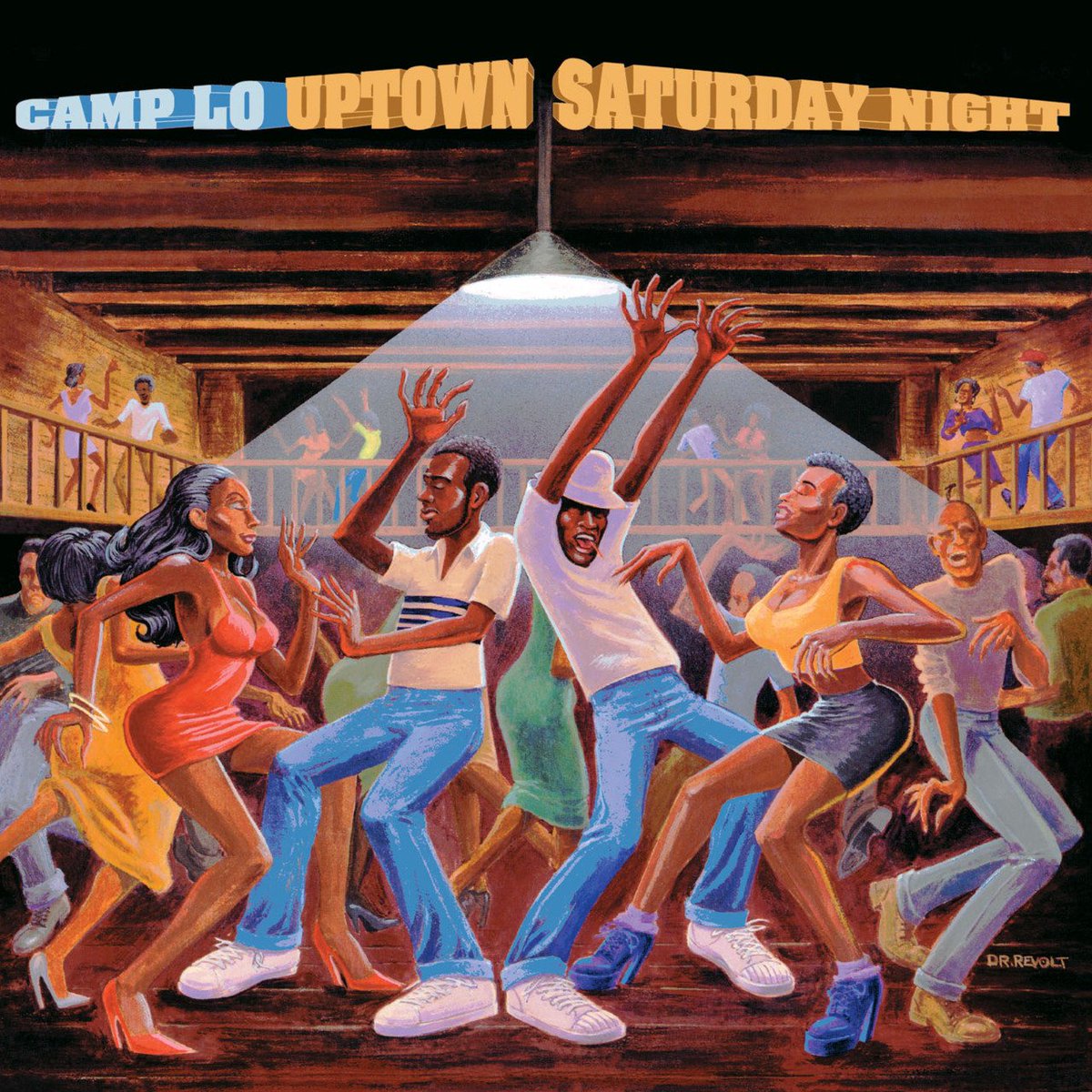 The American rap duo known as Camp Lo are probably a little underrated in the grand scheme of Hip-Hop… and there’s not much they can do about that. The very nature of Hip-Hop has collectivism and brotherhood (or sisterhood if you will) at its core and that has birthed a string of groups, not only to Hip-Hop but music holistically. Wu-Tang Clan, Public Enemy, A Tribe Called Quest, NWA… Need I go on?

And therefore when you think of Hip-Hop, you may not think of Camp Lo, but Geechie Suede and Sonny Cheeba should be respected as artists in their own right and their debut album, released back in 1997, Uptown Saturday Night, should serve as a gentle reminder of their pedigree.

The acclaimed debut studio album from the Bronx, New York hip hop group was released on January 28, via Profile Records and distributed through Arista Records. The album peaked at twenty-seven on the U.S. Billboard 200 and reached the fifth spot on the R&B Albums chart.

Before pressing play, one could assume the type of album that you’re going to get just from mere observation. The elaborate cover is a rendition of Marvin Gaye’s I Want You artwork which featured the painting ‘Sugar Shack’ by Ernie Barnes. The title is a subtle nod to the 1976 blaxploitation movie with Sidney Poitier and Bill Cosby and thus ties it all together with this overarching theme of blackness and expression.

From the opener, you know what kind of vibe you’re going to be treated to sonically. “Krystal Karrington” is overtly brassy and is a statement of intent, like the soundtrack to begin a movie. Sonny and Geechie speak about most things the album entails – from heists to parties, from bragging about their lyrical ability to hot sex on a platter, they flow through to a beat full of oomph.

The main single of the album “Luchini AKA This Is It” is an anthem of a song, which was a big hit on the Rap Singles chart where it reached #5. Thanks to the sample from Dynasty’s “Adventures In The Land Of Music”, it is bright, bold and horn-laden and the duo go back to back as they indulge on the finer things, exaggerating and bragging about the lavish, high-roller lifestyle and grand heists.

Going back to back on tracks became part of Camp Lo’s rap style on this album. It differs from the more usual order where each artist is entitled to their own full verse. Going back to back means their verses are shorter but if anything, it adds a different dynamic when listening rather than take away from structure and lyricism.

Uptown Saturday Night is jam-packed with songs of varying flavours and moods, take the more sombre “Killin’ Em Softly“. More deathly than the predecessors on the album thanks in part to the short, aggressive introductory monologue and the piano chords that dominate the track. But even in the chorus, there is still that ‘bounce’.

“Park Joint” has vibes of old school Hip-Hop with the looped melody serving as the skeleton of the beat, sprinkled with turntable scratches and guitar riffs. It feels like something you could breakdance to.

“Sparkle” paints a picture of black New York and the life of a city gangster. It is the duality between the array of good alcohol & women and the grit and temperament of the hustle and it’s full of references to other blaxploitation films. Its club jazz sound is laid-back and smooth; it transports you to an 80’s Jazz lounge.

“Black Connection” is one of the best displays of storytelling prowess on the album. it’s interesting because as much as their lyrics, storytelling and blaxploitation references would make you infer that these dudes are rough around the edges, their musical direction on the album as well as their more polished appearance as individuals will make you think otherwise.

Keeping to the various flavours, various moods theme, what you see is what you get with “Rockin’ It AKA Spanish Harlem“. From the hustle and bustle of the boogie Bronx, you are transported once more to the streets of Spanish Harlem where you are engulfed with the Latin fever that this song carries but the drum beat keeps is real old-school Hip-Hop.

This album is a family affair as it features Geechi Suede’s brother Jungle Brown on two occasions. “Nicky Barnes AKA It’s Alright” and “Say Word”. The latter in particular has a faster tempo which the duo take advantage of flow-wise and the key change during the chorus adds to the buoyant mood.

“Negro League”, another stand-out track contains a much darker sound with the inclusion of an ‘awkwardly tuned’ piano sample, not to mention a brilliant flow from not only the Camp Lo duo; the song also features distinct verses from Bones and Karachi R.A.W. who both bring their own personality and flair to the spooky beat.

“Black Nostaljack AKA Come On” channels 70’s disco thanks largely to the sample of “Tripping Out” by Curtis Mayfield. This is a great track on its own but is another great example of what Camp Lo have done well throughout the project; fusing classic funk and soul with their own brand of laid-back hip-hop. Praise should definitely go also to Ski Beatz who had a hand in this as well as most songs on the album.

“Coolie High” theoretically concludes the album and it does so in great style. The incredibly smooth, mellow sound of this song brings it right back fittingly to the sound of the 90’s and is achieved due to the sample of Janet Jackson’s “Funny How Time Flies”. Camp Lo leave us in a state of bliss as they provide another taste of the lavish lifestyle and they remind us how smooth and slick they truly are.

Additionally, there is “Sparkle (Mr. Midnight Mix)”, a remix of the sixth track on the album, void of drums and percussion, which serves as the final track on the listing, like a bonus track. “Coolie High” is one of the strongest songs on the album and would work better to see off the album but nonetheless, this oversight is minor.

As a whole, Uptown Saturday Night is a refreshing fusion of hip-hop, soul, and jazz that manages to avoid the clichés associated to un-stereotypical hip-hop while retaining street credibility. For that time, it was old school in terms of references and samples but new school in terms of flow and colloquialisms.

This is Hip-Hop when it was allowed to be unique and individual. Bar a few omissions, it is a solid body of work. While references may fly over your head, true Hip-Hop heads will truly appreciate it. Uptown Saturday Night is available to purchase on iTunes here, and to stream on all major platforms.