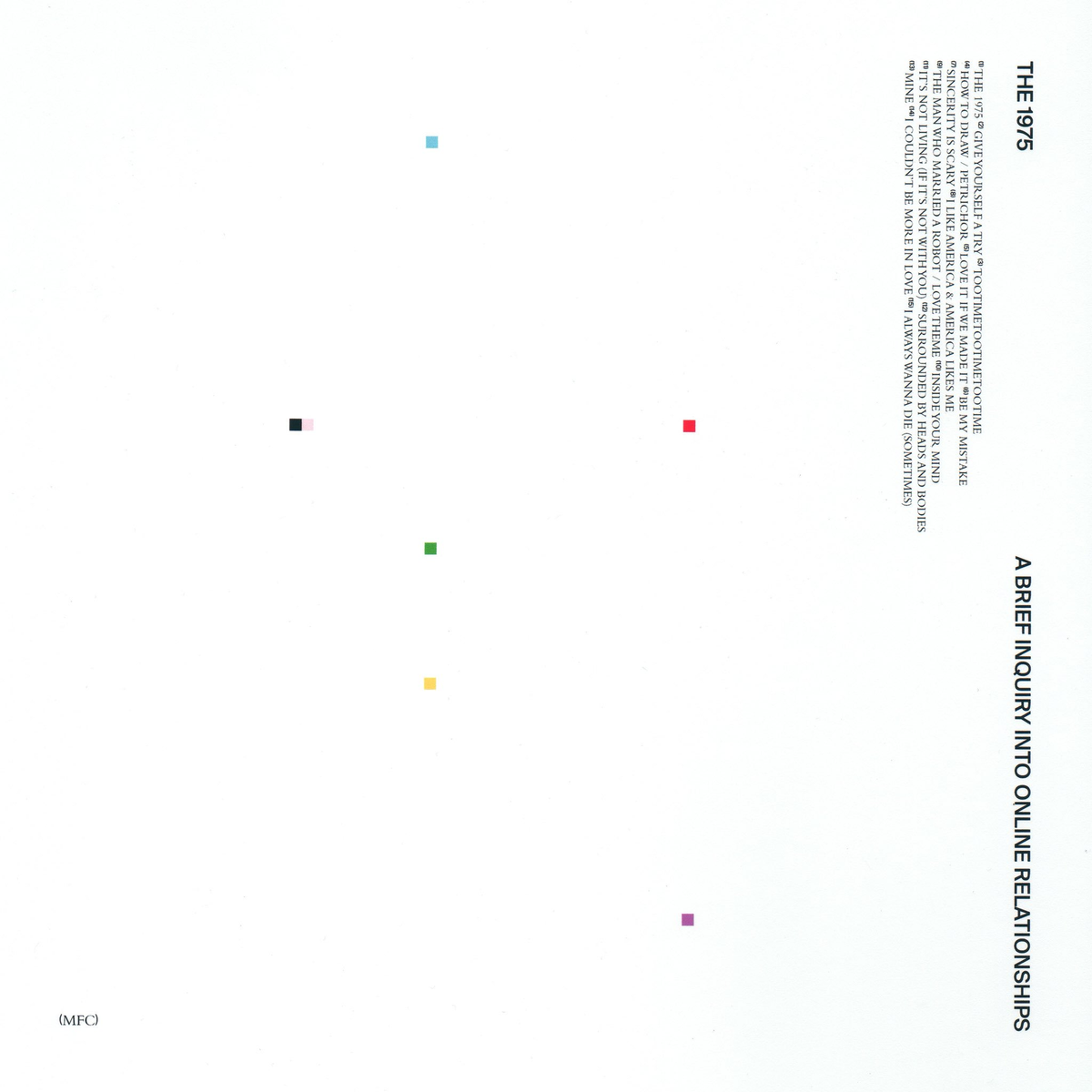 To be honest, I was not expecting this album from The 1975 at all after I listened to all the singles they released previously for the new album. From the generic tropical pop “TOOTIMETOOTIMETOOTIME” to a neo-soul inspired but somehow tasteless track “Sincerity Is Scary”, it just feels like – Meh, it’s OK, but that is.

However, the whole album eventually turns out to be a huge surprise for me with its well-refined texture and the ambitious fusion of sub-genres. From a millennial perspective and Matty Healy’s personal experience, A Brief Inquiry Into Online Relationships addresses issues related to depression, drug addiction, isolation, politics and technology in the modern society, and ultimately becomes the voice of Millennials.

Musically, this album is also sonically experimental with a range of genres and diverse styles. So, after a Lo-Fi intro crafted by its loungey piano and auto-tuned vocal, the leading single “Give Yourself A Try” reveals the album as a shoegazing and punk influenced opener.

It is synthetically driven by the analogue guitar riffs and bouncy drums. Then followed by the bouncy dancefloor banger “TOOTIMETOOTIMETOOTIME”, it creates a chilling and relaxing summer vibe crafted by its tropical house beats, swaying synths and bubbly electronic stabs.

Yet only until “How To Draw / Petrichor”, this album officially begins to surprise me. With the dreamy ambience that surrounded by minimal sound substances and cosmic synths, Matty’s auto-tuned vocal is texturally ethereal. Then followed by its intensive telegraphic stabs, the digitalized glitchy beats bruises with its syncopated drums, demonstrating their capability of experiment and a sense of artistry.

With the solid drums, flickering minimal stabs and Matty’s expressive vocal, “Love It If We Made It” discusses the fucked-up current politics and controversial social topics, and later states “Modernity has failed us”; while Matty’s guitar solo in the acoustic ballad “Be My Mistake” reveals a vulnerable feeling of regret and struggling.

A Brief Inquiry into Online Relationships is also well-balanced between personal and political, or in another word, micro and macro. Crafted by its soul-power horns and gospel choral, the jazz-influenced track “Sincerity is Scary” addresses the fear of revealing the true colours from personal perspectives.

Being described as a Kanye style track from several music critics, “I Like America & America Likes Me” delivers an atmospheric vibe that created by its urban melodies, sputtering synths and auto-tuned vocal. Lyrically, it is a political theme that is against gun violence and ownership.

After the 2-minute interlude of a storytelling monologue in “The Man Who Married A Robot / Love Theme”, the album turns into more touchable and sensitive texture in the final 6 tracks. The balladry “Inside Your Mind” emotionally reveals the craving of understanding and knowing more about another person.

Crafted by the bouncy tempo and 80s influenced contemporary rock upbeats, the euphoric “It’s Not Living (If It’s Not With You)” actually describes Matty’s heartbreaking experience of addiction and feeling of isolation. The gentle guitar acoustic “Surrounded By Heads And Bodies” continues the discussion of drug addiction and finally turns into a rehab lullaby.

Along with its melancholic piano pieces and jazz-influenced trumpet and saxophone, “Mine” delivers a tender and classical texture; while the soulful balladry “I Couldn’t Be More In Love” likes a reverse of 80s, reflecting the inner feeling of love and fear, lost and found.

The album eventually becomes explosive only until the highlighted track “I Always Wanna Die (Sometimes)” – which is my personal favourite. The atmospheric strings, boiling electric guitar and touchable vocal create a chaotic but yet cinematic curtain call, sonically recalling the 90s immersive art rock and brit-pop era that driven by Radiohead and Oasis, and eventually reaches the explosive and emotive climax.

A Brief Inquiry into Online Relationships is more like a biography or narrative documentary, having a panoramic discussion related to current social & political situation, depression, addiction, isolation and modernity. Inspired by predecessors and experimented from alt-rock to neo-jazz to glitchy electronica, their successfully shapes the vulnerability and sensitivity of modern individuals, under a dystopian situation but with an optimistic attitude.

Ultimately, A Brief Inquiry into Online Relationships may not be the best album of 2018, but it is definitely a game-changing record that will influence the music industry for a long while. Some of my favourable tracks include “I Always Wanna Die (Sometimes)”, “Surrounded By Heads And Bodies”, and “How To Draw / Petrichor”.

The 1975’s A Brief Inquiry Into Online Relationships is out now on Dirty Hit, purchase it on iTunes here and stream it below.