“It really is an honour to still be doing this”, Mick Fleetwood utters through an echoed microphone. And it really is, Fleetwood Mac have got to be one of the most unpredictable and exhilarating bands of the modern era, fuelled by passionate feuds and secrets which would be enough for break any other band up before their debut album had even been recorded.

Fleetwood Mac have an aura of sorcery and magic about them, that propels the band to keep going fifty-two years after the band was first formed. It’s difficult to not notice Lindsey Buckingham’s presence after his departure from Fleetwood Mac in 2018 following disputes with his old flame and frontwoman Stevie Nicks, which led to all sorts of legal action and social politics for the band.

Buckingham’s guitar wizardry, although unique and one of a kind, was almost seamlessly replaced by Neil Finn from Crowded House and Mike Campbell of Tom Petty And The Heartbreakers, but the fiery energy between he and Nicks on stage could never be replaced. Finn and Campbell alongside Nicks, Mick Fleetwood, and Christine and John McVie make up the current Fleetwood Mac ensemble, and boy are they ready to put on a show.

The stadium’s conversations whittle into mere murmurs as the opening act The Pretenders take the stage. An impressive special guest for Fleetwood Mac, but that’s a given considering the legendary status of the main act. Chrissie Hynde takes centre stage and appease the fans with their classics including “Brass In Pocket” of which the stadium echoed the iconic line “Gonna make you, make you, make you notice” without hesitation.

Guest performer Ali Campbell from UB40 made an appearance to accompany Hynde with their classic “I Got You Babe”, which was an extra surprise reflected in the roaring welcome the Birmingham-born reggae star. An exhilarating experience, The Pretenders really were the perfect ‘warm up’ to the energy that the 70-somethings were about to exude onto Wembley Stadium.

Amongst perhaps the best setlist I’ve seen in years from the classics “Dreams”, “Everywhere” and “Little Lies” to the underrated and overlooked anthems like “Second Hand News” and “World Turning”, were some pretty special moments that make Fleetwood Mac the band that they are.

Opening with “The Chain”, John McVie’s famously hair-raising bass riff sounded even more eerie as it echoed before 90,000 people, receiving the most respectable standing ovation I’ve ever seen mid-song.

As my childhood idol, there isn’t much that Stevie Nicks could do wrong, even in this biased state of mind, there is no denial of the justice she gave on of my favourites “Black Magic Woman”, changing the perspective fittingly alluding to herself as the mystery woman in the song.

Anything written by former Fleetwood Mac member Peter Green is the indicator of the band’s origins in deeper more blues directed places, and Nicks’ cover shows the collision of ‘old’ and ‘new’ Fleetwood Mac indicating that the band really do operate outside the parameters of time and deserving of the legendary status they have acquired.

Talking of legendary status, Mick Fleetwood just upped a notch as he assigned himself the official hype man of the evening, complete with a ten-minute drum solo, interjected by shoutings of “Give me some!” and “Don’t be shy now!” really showing how this tour and Fleetwood Mac are not existing for nostalgia’s sake, but for the fact that over half a century later, they are still doing what they love to adoring fans, providing new and zesty energy each and every time.

It wouldn’t be right to introduce Neil Finn and Mike Campbell into Fleetwood Mac without acknowledging their respective pasts, and this touch was a personal highlight, when Neil Finn took centre stage to sing his Crowded House classic “Don’t Dream Its Over”, which as Nicks’ described it herself as “one of the most beautiful songs ever written”.

The crowd lit up the stadium with and array of swaying lights which looked as though the unworldly Fleetwood Mac had been launched back home into the cosmos. Returning for the encore, Fleetwood Mac sang the late Tom Petty’s ‘Free Fallin’’ to honour their fellow friend and acknowledge fellow band member Mike Campbell.

I couldn’t write a review on the Fleetwood Mac gig without mentioning my personal favourites, “Rhiannon” which “rings like a bell through the night” in my head almost constantly and “Go Your Own Way” written by Lindsey Buckingham allegedly about ex-lover Stevie Nicks.

There’s something simultaneously haunting and comforting in Stevie Nicks’ voice which is encapsulated in these songs, especially coupled with the dramatic context of “Go Your Own Way” showing Nicks’ deserved place in the Rock and Roll Hall of Fame 2019 as a solo artist.

There was something equally as introspective as seeing Nicks actually perform “Rhiannon” in front of me, that it wasn’t just a favourite song of mine on an album, but now a personal, unforgettable, intangible experience. Another Nicks’ classic is “Landslide”, which she laughed about writing when she was only twenty-seven.

Nicks dedicated “Landslide” to the band Haim, fellow sisters of the moon who are promising leaders in the next phase of legendary female musicians, which was a lovely nod to the long overdue uprising of recognition for female musicians, specifically those outside of the traditional ‘pop’ genre.

“Don’t Stop” was the band’s final song, and one which the lyrics are the most uplifting yet not cringy, which could only be pulled off by Fleetwood Mac. The stadium chanted along to the feel-good energy which closed the show on a high.

The music stopped, the lights came up, the people piled out, and I can only imagine the smile on Fleetwood’s faces as they prepared to do it all over again on Tuesday, June 18, the 62nd and last show of the Fleetwood Mac Stadium tour. 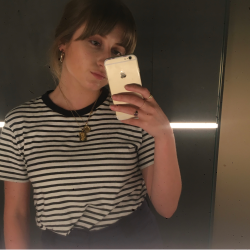 Lucy Thomas
I'm Lucy, 22 and a BA English graduate from Bournemouth University. I've been writing menswear articles for the online magazine on OPUMO.com for the past year, and really wanted to get into music writing as its a hobby of mine listening to new music, as well as old music, and trying to appreciate and engage with all genres and styles. I mostly listen to 70s stuff but am really optimistic about the future of music and love listening to new releases. Alongside music and writing, I currently work in hospitality until I can get enough experience to freelance properly and make enough money to support myself.