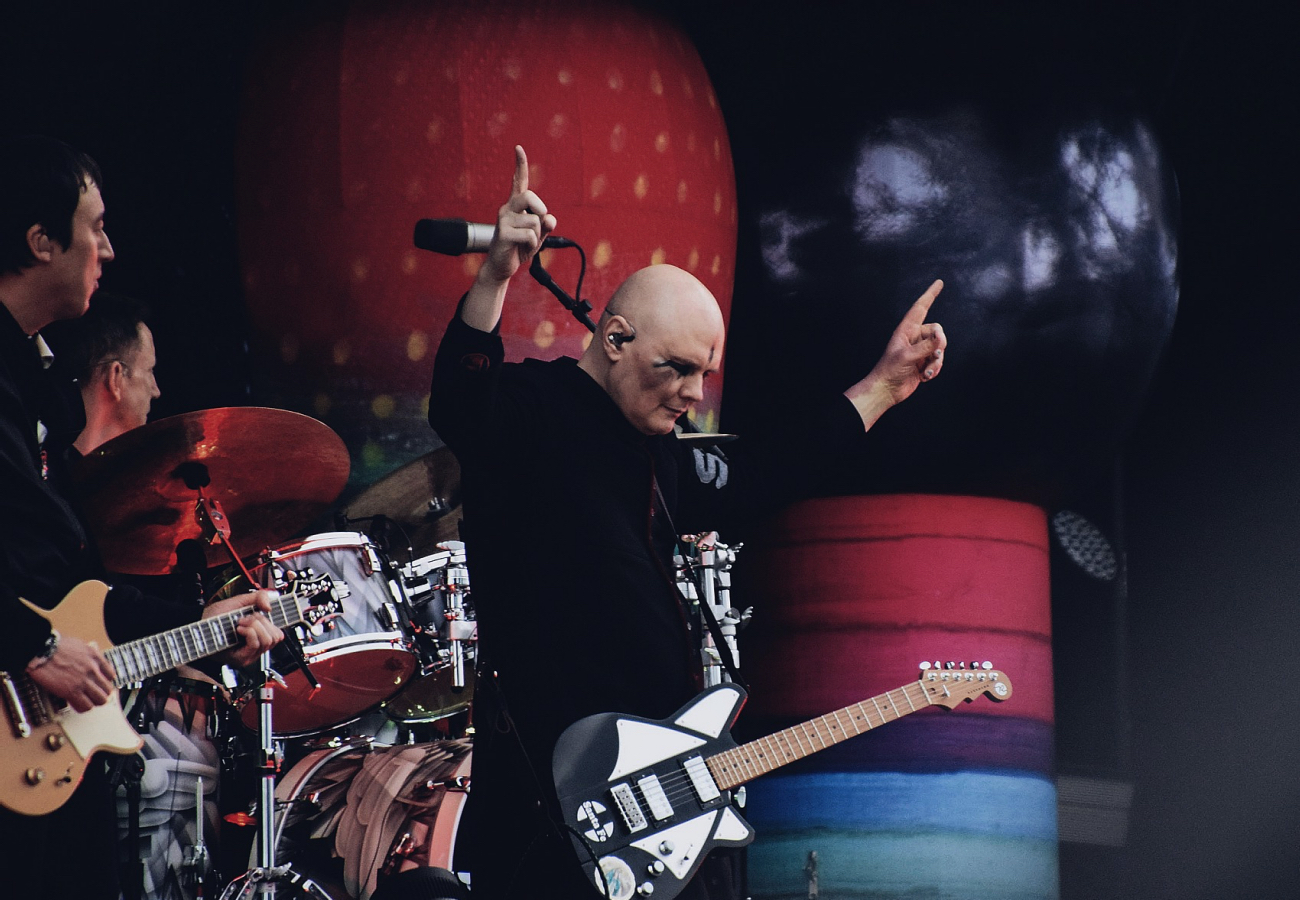 Black clouds and gloomy weather were the perfect backdrops for Download Festival 2019 from June 14-16, as over 85,000 rock and metal fans gathered at the spiritual home of rock and metal, Donington Park. Here are just a few of our highlights from the 3-day festival!

There has always been an air of class and coolness around Opeth, who performed on Friday, June 14. It might be the smooth personality of frontman, Mikael Åkerfeldt, not even straining to let out deepest darkest demonic growls, or maybe just the fact that they were so laid back on stage.

Opeth took to the Zippo Encore stage and peeled out the opening jaunty jazz-inflicted opening riff of “Sorceress”. It quickly became evident they don’t mess about, crashing straight into “Ghost Of Perdition” and ended their set punishing the hit “Deliverance”. They also played “Cusp Of Eternity” and “The Drapery Falls”.

Eagles Of Death Metal was in high spirits, and their Friday set can only be described as, hard rock, but with great vibes. This band is by no means metal; however, metal fans were gyrating along with vocalist Jesse Hughes and his current band, Jennie Vee on bass and Jorma Vik on drums.

Hughes was charismatic and interacted with the crowd throughout the performance. The band was tight with an infectious energy which resulted in a sea of ‘moshing’ and awkward dancing.

My ultimate highlight of the weekend had to be Rob Zombie and his travelling horror show. It is evident why he remains such a vital part of the rock and metal scene. The sun came out for this stomp-laden set and the hip-shaking Astro-Creep king was dressed in his signature ash-dusted space cowboy outfit.

British Rock Legends, Def Leppard headlined on Friday, and their crowd was made up of a healthy mix of punters and fans singing along to all twelve tracks of their hit album, Hysteria that was performed in full.

Larger than life singer, Joe Elliott was kitted in a sequenced blazer and bellowed out catchy rock songs and displayed an impressive ranged. The band delivered a polished set, and the crowd responded with arms swinging in the air. Nostalgia at its best.

On Saturday, June 15, instrumental progressive project Animals As Leaders delivered a dynamic display of guitar work and can only be described as wizards on guitars, dense, complex and hooky. The drum-work completely blew me away, with drummer, Matt Garstka drum patterns being detailed, on point and flawless.

Black death majesty Behemoth delivered an intense set of thrashing darkness from the first notes of “Wolves Ov Siberia”. All dressed in their distinct black shrouds with blackened skulls, the band performed with intensity and transported the crowd into another dimension.

Crowd-pleasers were “Ora Pro Nobis Lucifer”, “Bartzabel”, “Ov Fire And The Void”. Hardcore stage image aside, frontman Adam Darski sounds like a nice guy that I would have tea and crumpets with, any day.

Mongolian rock group The HU played the Dogtooth Stage on Saturday and people packed out the Dogtooth Stage tent as hordes gathered to try and catch a glimpse. The band blends heavy-metal and traditional Mongolian throat singing which they call “Hunnu Rock” and includes old Mongolian war cries and poetry into their music. Definitely, one to watch!

Then the rain came down, stopped and a double rainbow appeared, followed by hip-hop outfit Die Antwoord coming on stage. They were introduced as “They’re not metal, but they’re f**kn hardcore”. The trio went straight into it and delivered electronic dance beats and rapping that is a mix of English, Afrikaans and Xhosa.

Ninja swaggered onto the stage, at one point saying, “I don’t know why they booked us to play to all these metalheads… it makes no sense”. It didn’t make sense, but their “Fatty Boom Boom”, “Baby’s On Fire” and “Fink UR Freeky” struck a chord with the ‘Slipknot’ crowd. Yolandi and Ninja bounced around the stage, delivering a bizarre mix of tunes and lyrics.

Then it was finally time for Slipknot. With “here we go again, Motherf**ker”, singer, Corey Taylor, kicked off the Saturday headline set launching into “People=S**t” from their second album, 2011’s IOWA. Madness ensued with some of the crowd dressed in clown masks and boiler suits.

Although less of a production than normal, they still had an impressive stage set-up with percussions sets high on moving platforms. The set was brutal, nihilistic, with relentless moshing. The crowd sang along to “Before I Forget”. A weird looking old man in a raincoat was creeping around the stage. There was no grand display, but the crowd ate it up. The band will be dropping album number six in six weeks.

Their pulsating “Laid To Rest”, generated possibly the biggest mosh-pit I’ve ever seen. Throughout the entire set, every single person had their fists or horns in the air, and barely a person had their feet on the floor. Donington Park literally was bouncing with energy and beer was flying everywhere.

Sunday was always going to be about prog-metal titans, Tool. For a band that hasn’t released a note of music in over 11 years, the excitement was tangible in anticipation for the band to come on stage. Although playing the same time slot as Slayer’s final ever UK show, they still managed to attract thousands. The set consisted of darker tracks being brought to life with massive visuals.

The band paid little attention to the crowd, with main-man Maynard James Keenan, dressed in old-school punk-style plaid pants with Joker-like grimace, hidden on a platform towards the back of the stage.

This, however, did not take away from the band delivering a flawless performance with tracks including “The Pot”, “Stinkfast”, “Schism” and two tracks “Invincible” and “Descending”, from their upcoming album. An astonishing end to a sublime weekend of music.

In addition to the above, WPGM witnessed an extraordinary bill of industrial metal, nu-metal and heavy metal, new, niche and mega-bands. The occasional torrential downpours and mud did not dishearten anyone. It was a memorable weekend filled with headbanging, fist-pumping and devil horns. We will definitely be back. Get your hands on next year’s tickets here.