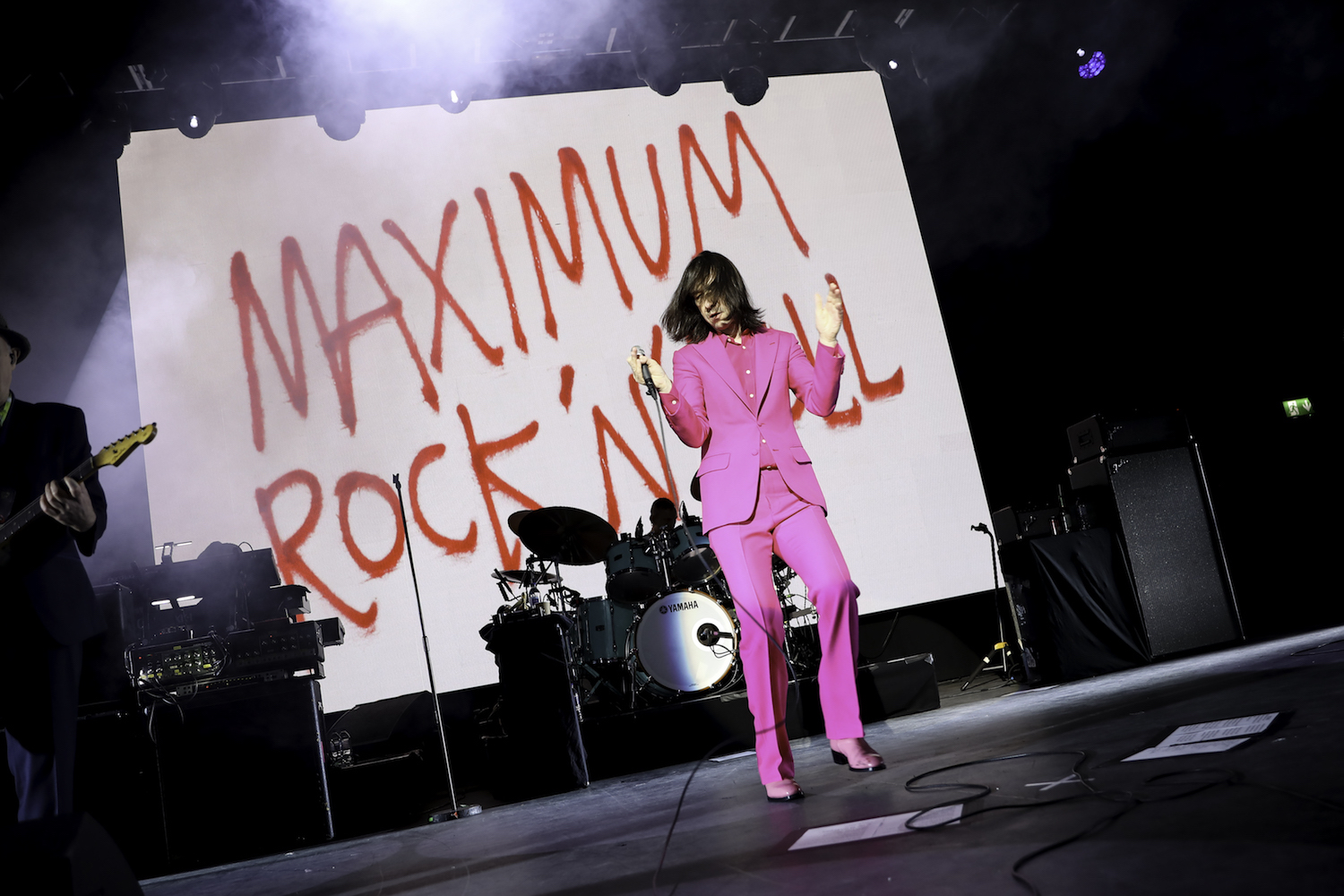 Looking out into the crowd, I knew it was going to be a fun night. Ladies holding bottles of red wine giggled nearby while a man shamelessly dances to the DJ’s choice of classic rock. Pop rock legends Primal Scream were about to take the stage at the sold out London O2 Kentish Town Forum for the second night in a row.

They are currently on a UK and Ireland tour supporting their new singles compilation Maximum Rock ‘N’ Roll. With a massive catalogue and an artistic approach, Primal Scream show what it takes to be “the” experimental pop rock band.

The venue was packed to the brim with young Camden kids and Greater London adults ready to see a band whose influence clearly spanned multiple generations. The energy in the room steadily rises. The stage lights turn off with only blue lights shining down.

Fans whistle and hoot in anticipation, until The Clash’s “London Calling” plays and the entire room is singing in unison. Then it all stops. In the darkness we hear the chirps of Primal Scream’s “Don’t Fight it, Feel It” played over and over on the house speakers.

Lead singer Bobby Gillespie comes onto the stage in an impeccably tailored, almost metallic blue suit, beckoning the crowd to sing along with the song’s “rama lama lama, fa fa fa”. The fun, upbeat tempo permeates through the crowd as fans throw their hands up, submitting themselves to whatever is to come.

The dance vibes are cut short as the band goes into “Swastika Eyes”. The on-stage monitor starts flashing images in rainbow colours, while heavy guitar riffs and strobe lights seem to be going out of control.

The images on the screen show military equipment, targets on vehicles, the atomic bomb, and the current President of the United States. The images keep changing, the colours going from red to orange to blue, and so forth.

Along with the different images, there is also a video shown of a typewriter writing “illusion of democracy”. Primal Scream was clearly making a comment on the current political situation in a harsh, musical and visual way.

The rest of the night would be a back and forth between these two styles. The crowd would find themselves either dancing to infectious pop songs or jerked into an almost epileptic shock with rock guitars and piercing visuals.

At one point, Gillespie even pokes fun at the crowd. He sarcastically states, “Too bright, oh too bright”, as fans held up their hands to their eyes as visors.

The band would play pop classics like “Call On Me”, with images of different women on the screen and eventually go into “Kill the Hippies” accompanied by videos of fighter jets and a noise emulating the sound of helicopter propellers filling the room.

Primal Scream also charmed the crowd with some of their almost-ballads. Gillespie crooned to “Cry Myself Blind”, singing about a lover that has left him behind, followed by one of my personal favourites, “I’m Losing More Then I’ll Ever Have”. The raw emotions can be felt all the way to the back, with tears welling up in some concert-goer’s eyes.

The night ended with some of Primal Scream’s most iconic songs. The crowd swayed to “Velocity Girl”, famous for being included on the now infamous NME 1986 cassette compilation.

The term C86 has become synonymous with guitar-based power pop, and Primal Scream fits into this perfectly. Performing “Dolls (Sweet Rock and Roll)” and “Movin’ On Up”, it was evident that these songs were the pure emulation of guitar pop.

The set ended with the entire balcony, even the designated “Sitting Only” section, on its feet. Of course, the band responded by performing an incredibly chosen Encore set.

Fans sang to “Come Together”, “Jailbird”, and the forever radio favourite “Rocks”. Gillespie could not help but smile along to the lyrics that were sung back to him.

Fans of Primal Scream could not have asked for a better show. With single after single performed, the crowd got exactly what it hoped for. The very best of Primal Scream. This band has been a dearly loved for years, and after tonight no one could argue their success.

But, let it be known that going to a Primal Scream gig is not for the faint of heart. The fast-changing images, heaving visuals, blinding lights, and strong rock guitars made it a show where standing back and just passively taking it all in was not an option. The entire show was a shock to your system, but one you will happily take.