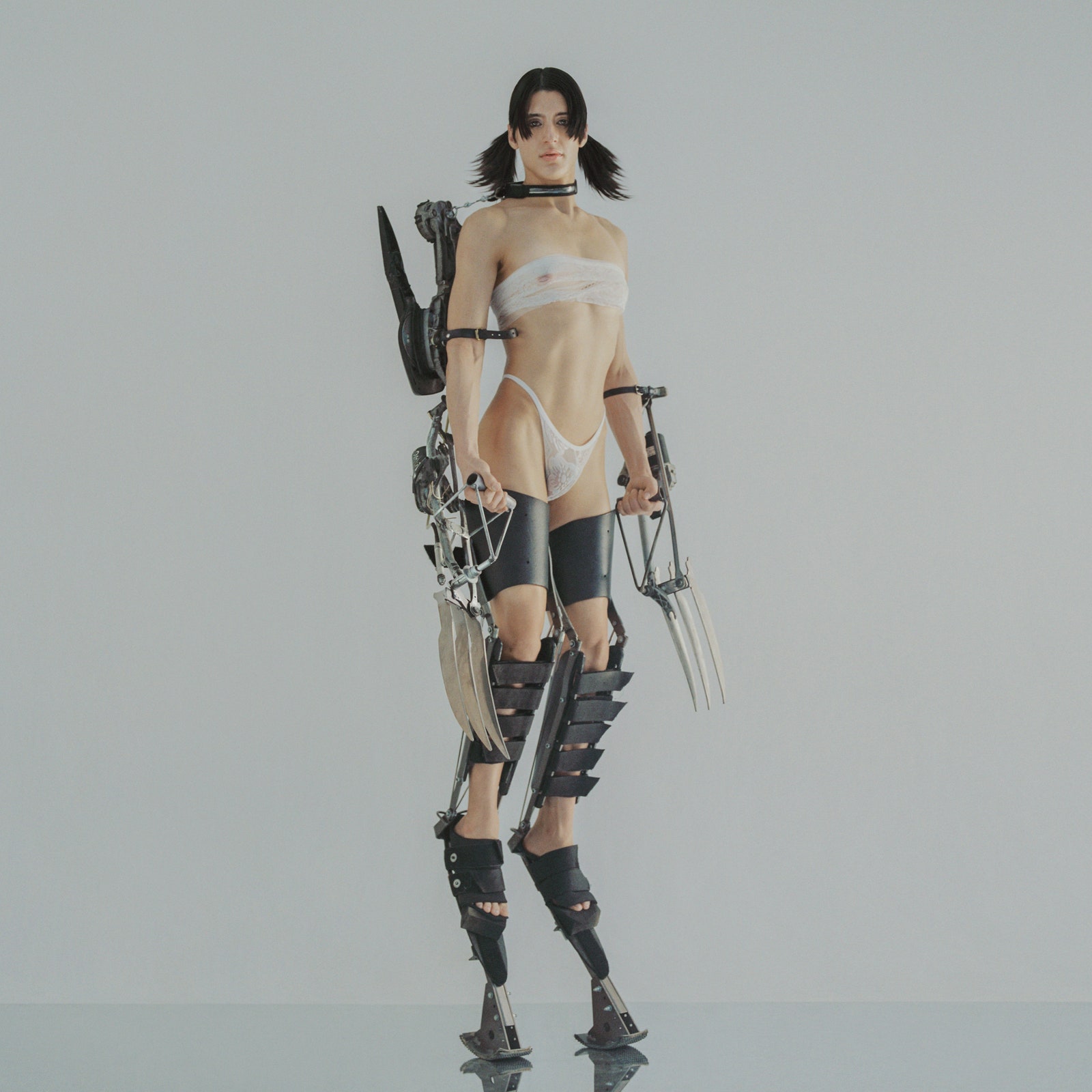 The 21st century is all about change and evolution. The world as we know it has been gradually shifting to a more progressive outlook, whether that is regarding poverty, climate change, sexuality/gender identity and more recently racism and culture. Many artists reflect the world we live in and they to, express and demonstrate artistic or personal progression.

Arca is one of those individuals, who recently came out as trans/non-binary and prior to this declaration of personal evolution, her music has already been a representation of her journey.

From mangled, uncompromising stainless-steel edged bodies of work like Xen to a stepping out from the shadows with her earth-shattering debut Arca; she has never been a stranger when it comes to evolution.

With her sophomore album KiCk I, Arca once again transcends the chains that bind and has crafted an album that embodies her style of warped albeit intoxicating pop.

Opening track “Non-Binary” sets the stage, with glacial synths and robotic glitching, while Arca fiercely raps about empowerment of the position she now finds herself in.

Make no mistake this is a rallying cry and a bold declaration of identity. You would think after such an opener the momentum would continue, however, much like the album, it is akin to peaks and valleys in terms of cohesion.

“Time”, an ethereal and exquisitely beautiful slice of pop follows the opener, juxtaposing the previous fire and passion. What follows next is a genre spanning array of bombastic, explosive, and deliciously enjoyable anthems.

From reggaeton madness with “Mequetrefe” to fervent, deconstructed club in the shape of “Riquiqui”, where Arca once again flirts between her trademark haunting, seismic machinery instrumentals and pop sensibilities found in the vocal melodies and lyricism. In between this chaos, Arca’s emotional state seeps through, adding another layer.

Arca refuses to slow down, as she delivers a one-two punch including her best songs to date. “Watch” featuring Shygirl is UK garage malformed, where its short-circuiting, spliced together synths echo joyful torment as Shygirl coldly rides the beat with fearlessness.

Then there is the larger than life reggaeton anthem featuring Rosalia, which can only be described as Arca mutating the tried and tested formula we have come to know. Bombarding, cascading synths and kicks erupt from the get-go, as Rosalia’s chopped and screwed vocals weave in and out of the musical chaos.

On paper, neither of the songs should work, but they do, and they are both incredibly powerful experiences. Both songs highlight the lack of cohesion and raucous nature of the album, which may put some listeners off, as it can be difficult to soak up the assault on the senses. However, those who can embrace the storm, will find plenty to enjoy.

And as we reach the end of KiCk I, Arca delivers the final flashes of lightning. More unbridled anarchy ensues with “La Chiqui” featuring the electronic/pop pioneer SOPHIE.

There is so much to say about this song, from how the distorted, torn apart structure is all encompassing, to its rampant BPM and softer moments which all come together to form a slice of transcendent pop music.

“La Chiiqui” highlights KiCk I, as it embodies all its parts, the calm before the storm, its twisted, erratic nature, the exploration of genres and most importantly, it is emotional core. The final song I would like to mention which oozes vulnerability and emotion is “Machote”.

This song is probably the most mainstream Arca has been since “Desafio”. “Machote” features a more traditional song structure and its formula is a culture melting pop of trap, reggaeton and pop served on a silver platter in a manner that only Arca can.

While KiCk I is a modern pop escapade at heart, it certainly is fashioned in futuristic distortion. This is not an experience you can merely dip your toes into, and a lot of the content can be gruelling. Arca has delivered a body of work that embraces her mind, body, and soul; it is unapologetic, unrelenting, and unequivocally excellent.

Listen to Kick I on Spotify below and stream or purchase it everywhere else here.