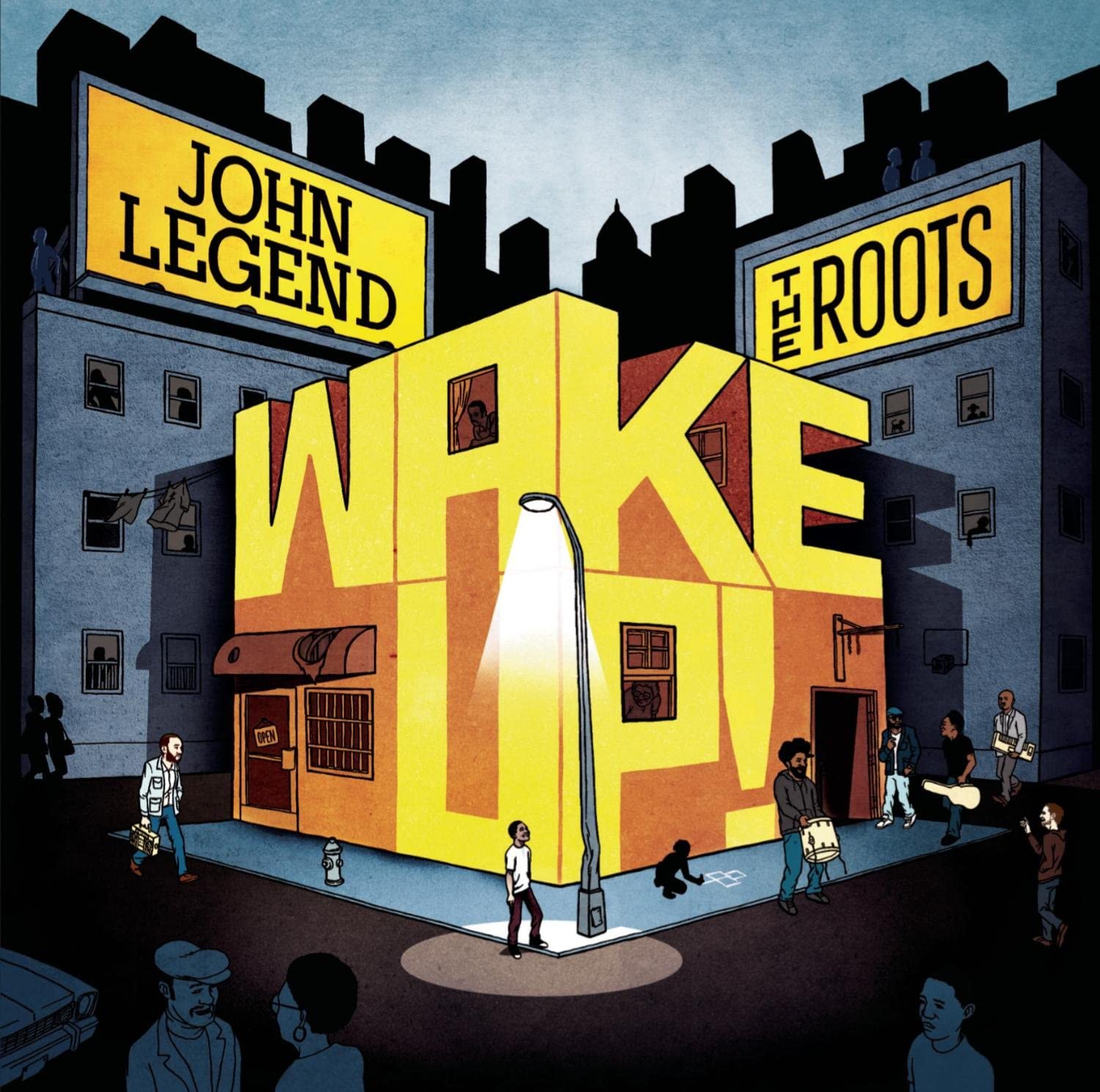 Wake Up!, the 2010 album from John Legend and The Roots, is rousing, soulful and hopeful, but a response to real-life struggles. Just as likely to make you think as it is to make you dance, it contains plenty of energy and feel-good spirit, along with some melancholy along the way.

The album is pretty consistent in terms of quality, but the songs branch out into a number of different styles, including reggae, hip-hop, rock and gospel, while always having at least one foot in the field of classic soul.

According to AllMusic.com’s Andy Kellman, the album is a “set of ever-relevant songs from the ‘60s and ‘70s”. Be that as it may, the album forms whole so coherent that it feels as though it was written by a few composers that were all in the same band rather than a collection of covers, eclectic though it is.

Kellman continues, “A few exceptions aside, the source material will be unfamiliar to the average fan of the artists”. This fact surely increases the album’s stock in the minds of diligent collectors and hungry fans.

The Roots, though they are playing straight R&B here rather than their usual hip-hop, are magnificent. They are known for solid musicianship using live instrumentation, and here they sound masterful. For example, Owen Biddle, the bassist on this album, excels, playing a number of complex and fluid lines. The six-stringed guitar-playing on display is also great.

One of the most memorable tracks on the album, “I Can’t Write Left-Handed” (a Bill Withers cover) features impassioned, Hendrix-like work on guitar that draws more from alternative and hard rock than it does from conventional R&B. Like the rugged, funky guitars on “Compared To What”, it was created by The Roots specially for this album.

Black Thought, The Roots’ MC, makes two appearances: one on “Hard Times“, the other on “Little Ghetto Boy“. He only disappoints by not appearing more often to lace his band’s jams with words. Veteran rappers Common and CL Smooth also make cameos which go well.

While the backing band is so good that it would perhaps threaten to dominate proceedings if its primary collaborator were less skilled, John Legend holds his own as pianist and lead vocalist throughout, delivering performances which are sometimes delicate and at other times lively. Legend’s piano skills are especially apparent on “I Wish I Knew How It Would Feel To Be Free“.

More positives come in the form of brief moments. These include times when you can hear particularly good supplementary adornments, like the lush strings on “Hang On In There” and “Wholy Holy“, and the wonderful backing vocals on various songs.

Despite a number of exciting moments, the album arguably never gets more stirring than when the interesting, but relatively calm, intro of the opening song (and Curtis Mayfield cover), “Hard Times“, gives way to the song’s main course. Like the chorus of this album’s second song, “Compared To What“, it’s punctuated by horns and fast-moving bass.

On songs like “Our Generation (The Hope Of The World)“, the buzz created by the music is matched by a lyrical call to action (for example, “It’s all left up to us… Let’s do just what we must”).

“Humanity (Love The Way It Should Be)” is another highlight here, featuring a ska groove, beautiful vocals and optimistic lyrics. The blissfully joyful-sounding “I Wish I Knew How It Would Feel To Be Free”, complete with what sounds like a gospel choir on backing vocals – is the climax of the set, but it’s “Shine” that finally brings things to an end pleasantly.

Overall, Wake Up! is well-played and, for most of its running time, compelling. Its quality ensures it is an album that must be heard, ranking up there with the best of these highly-skilled performers’ respective catalogues.

Wake Up! by John Legend and The Roots was released in September 2010 via Getting Out Out Dreams and Sony Music, purchase it on iTunes here and stream it on Spotify below.