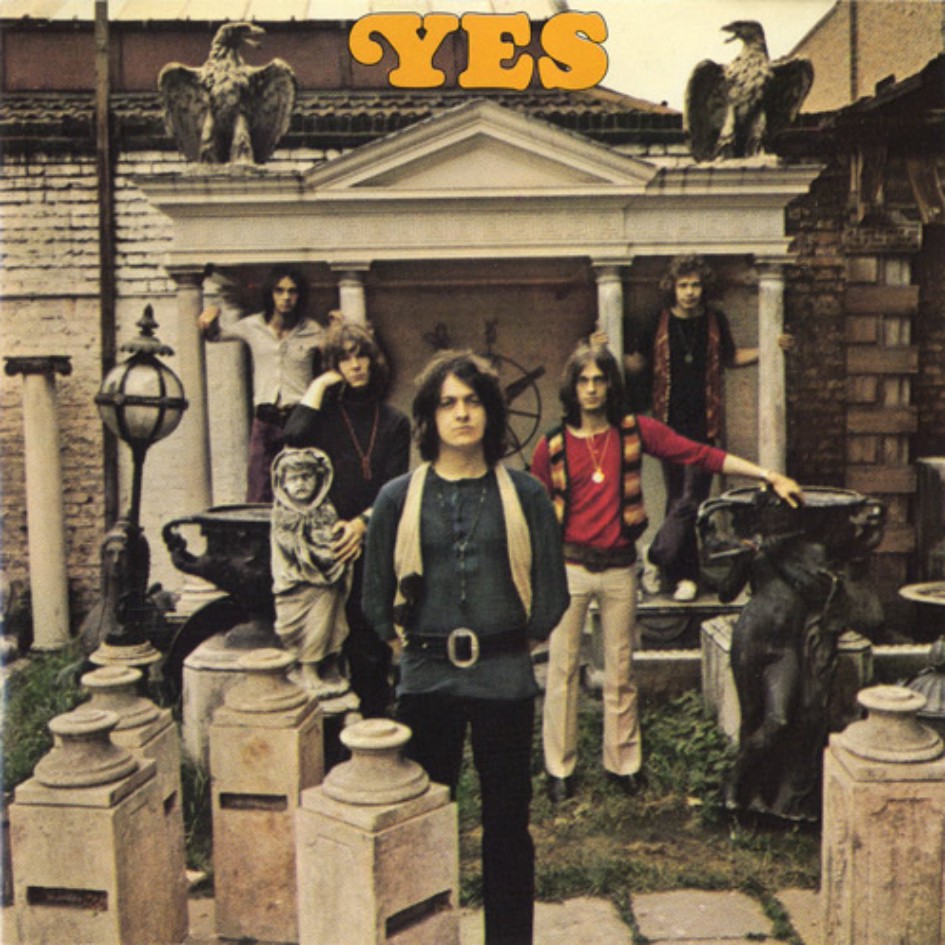 On Friday, July 25, 1969, British progressive rockers, Yes, released their eponymous debut. The album, Yes, has now reached its forty-seventh year. Quite a landmark. In many respects, the album has aged quite well, providing a sneak peek of things to come at that point.

Funnily enough, this was the same year Genesis released debut From Genesis To Revelation (March 7) and King Crimson released debut In The Court Of The Crimson King (October 10). You could daresay that Yes had little to worry from the eldest of this progressive rock triumvirate, as Genesis dwelt predominantly, at the time, in Sixties psychedelia.

However, young pups King Crimson were pursuing a similar bent, albeit maybe a more aggressive strain, of classical inspired music with jazzy elements. Whether the fact that, at some point, virtuoso drummer Bill Bruford played for both bands factored in this, is another discussion entirely.

Looking at Yes’s cover, you’ve actually got two covers to look at. There’s the first, original UK release one which’s basically a black background set against a three dimensional doodling of a speech bubble. The width of the bubble is blue, and the rest is red. The words inside the bubble are red, and they, too, in their width, are blue. Furthermore, this speech bubble appears to emanate from a tiny, grey Atlantic Records logo. Perhaps big things come in small packages?

There’s then the second, original US release one which’s arguably got more going on in it. It’s got the five members of the band; Jon Anderson, Chris Squire, Bill Bruford, Peter Banks and Tony Kaye. They stand in a triangular formation in a very ornate looking garden, Greek and classical looking. Two at the back appear, left to right, under pillars that could be the remnants of Atlantis. So much so, it’s as if they’re holding them up, stopping them from collapse.

The backbone of the band, perhaps. Then, further forward you seem to have Squire, fed up and with his right elbow leaning on the statue of a small, hooded child. To Squire’s right is most likely Bruford, not so fed up but with outstretched hand placed on top of a naked, sculpted birdbath. Right out front, you have Anderson, both hands behind back. The composed posture of an assured rock and roll frontman. A progressive rock frontman.

As you might expect for the era, and the fact the band was still in relative infancy, the album has some covers; ones from The Byrds and The Beatles respectively. These renditions are very exploratory, and far from derivative. Other than that, little criticism can be thrown towards the band due to sheer invention.

Album opener, “Beyond And Before”, begins with high register bass and sizeable organ. The guitar becomes triumphant, before the vocals kick in. These harmonise beautifully, which would then become part and parcel of their future signature sound. These are set amongst chugging rhythms, seemingly at odds but working quite well.

There’s then a vocal refrain, punctuated with clanking intermittent rhythms. That wailing bass of the late Squire, searching for the skies, is a powerhouse performance, indeed. The song becomes truly progressive in its nature in its closing moments; periods of light and shade, loud and quiet.

“I See You” is next, a cover of The Byrds. This one’s a jazzy one, with some tasteful guitar, it taking centre stage with Anderson’s sun kissed vocals. It turns up another notch as the drums kicks in, a puffing steam train inciting seemingly heavy jazz. It somehow still has a relaxing vibe to it. This doesn’t last long, though. That biting, incisive bass really amps up proceedings. This, in turn, doesn’t last long, either.

The drums return to their jazzy chops, very hi-hat orientated. That aforementioned jazz guitar becomes searching and contemplative. The drums get busier, and they seem to duel with, and bounce off, the guitar. Then the soundscape comes crashing all around, the wild roar of the guitar laying waste to any peace and quiet remaining in the track. However, seamlessly the calm returns, though moody and still quite animated. The closing moments are mighty, grand crashing all around.

Ambient “Yesterday And Today” opens with beautiful vocals from Anderson. Everything is calm and sedate, delving into almost absolute silence, before, again, emerging with a pattering tempo, like rain coming off panes of glass. The piano tinkles and builds, maybe sitting down beside a roaring fire, as the rain hails down outside.

Come “Looking Around”, things are a bit more upbeat, the organ and guitars locking in for quite a sizeable, roaring riff. The guitar’s time to shine is jazzy, chordal and seemingly never derivative. The bass then weighs in with some high register licks, ringing in the listener’s ears. What seems to be another guitar solo, heralds some grandiose organ. The song then hammers back in, though vocal refrains make these moments quite intermittent.

The curious “Harold Land” comes in with chugging bass, ringing with a clarity perhaps not so common in those days of the late Sixties. That rhythm remains, but doesn’t stop proceedings from getting progressive. However, the vocals are given ample opportunity to breathe, before building into a remarkable crescendo whereby the whole band seems to come together.

The organ sounds majestic as that bass rings with real clarity. There’s a real sadness tinged feeling to the whole thing, though hinting, perhaps, at some sort of eventual triumph. This comes via that ebullient bass, and the whole band rise to another crescendo for the song’s end.

“Every Little Thing” is apparently a reworking of the song by none other than The Beatles. The drums build and build, pounding those toms for atmosphere. It really is a cacophony, an absolute rock and roll racket. One can only imagine how this would’ve translated in a live context. It’s difficult to recognise at first, but then the guitars seem to play the original vocal melody on their strings.

Also, there are strains of the famous riff for “Day Tripper”. This crashes with the kind of drum flourishes that The Who’s Keith Moon became renowned for. It has the beautiful clarity of The Beatles’ most melodic moments, with the heaviness of bands like Cream; those who would help, inadvertently, create hard rock and heavy metal. The vocal harmonies, for instance, cut through superbly all the histrionics of all the instruments.

Indeed, “Sweetness” sounds as it’s titled. Anderson’s vocals, calm as placid waters, are in tandem with beautiful, searching bass. The drums really build the dynamics, both calming down and upping the ante with a seamlessness that’s a joy to listen to. The sedate moments are vulnerable, but not out of tune as latter day vulnerability would come to define itself as. Things clatter, relatively, before the fadeout.

Closer, “Survival”, opens with game changing licks of bass guitar on a wah-wah pedal. Things scurry and build with increasing atmosphere. Then comes quite a profound change, just acoustic guitars creating a soundscape to wash over the listener, as if going overseas and somehow witnessing no hurrying waves to contend with.

Just sheer bliss. That is, until, the vocal harmonies build and that crunching bass kicks in. Either that, or the destination is in the not so far distance. For it is, pondering it, a rise of joy, rather than a feeling of impending doom. A final flourish, at least you think is one, comes with climbing, cyclical guitar and bass riffs that greet the song’s final, actual, end.

This album is excellent throughout, and even to be pedantic and exclude the covers “I See You” and “Every Little Thing” still leaves the guts of a classic effort. You just about get the full span of emotions and feelings with the relaxing and cathartic “Yesterday And Today”, which transports you to those days of heavy rain and being glad you’re inside.

Although the album’s a true blue classic throughout, it’d be hard to name the best track as anything other than finale “Survival”. That acoustic change is as sudden as it’s seamless, and combining that with pioneering wah-wah bass are two of many reasons why it’s a standout. Never mind the fact that, like “Yesterday And Today”, it’s power to transport, via soundscape, is practically second to none.

Further to that, the jazzy elements throughout are, yes, relaxing and like easy listening. However, given the music’s progressive nature this is also challenging to the ear. The sense and consciousness of dynamics is supreme, somehow seamlessly connecting what would usually be disparate themes in an abrupt manner that isn’t even jarring.

Put simply the album is all about ambience and the ability to transport the listener elsewhere, via very often layered soundscapes performed by musicians, many of which were of virtuoso ability. Their ability to do this, whatever the line up over the ensuing years, would only ever increase.

Yes are in the annals of rock music, and started their legend very early in their career. You can purchase Yes on iTunes here.